VATICAN - Consistory for 13 new Cardinals: "their origin expresses the missionary vocation of the Church" 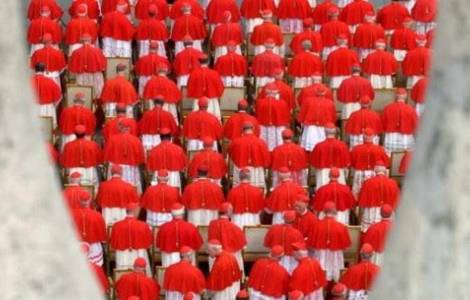 2020-01-25
A day devoted to the Bible should not be seen as a yearly event but rather a year-long event: initiatives in local Churches

Vatican City (Agenzia Fides) - After the Angelus Address the Pope yesterday, Sunday, September 1, the Holy Father announced a Consistory for the creation of new Cardinals with these words: "On Oct. 5 I will hold a consistory for the appointment of 10 new cardinals. Their origin expresses the missionary vocation of the Church, which continues to proclaim the merciful love of God to all the people of the Earth". The Pope, after having named the 10 new Cardinals, continued: "I will also add to the College of Cardinals and elevate: two Archbishops and a Bishop who have distinguished themselves for their service to the Church ".
Three of the new Cardinals, the Archbishops of Jakarta in Indonesia, of Kinshasa in the Democratic Republic of Congo and of Rabat in Morocco, are Ordinaries of territories entrusted to the Congregation for the Evangelization of Peoples. Furthermore, among the emeritus members of the College of Cardinals, there is Archbishop Michael Louis Fitzgerald, English, of the Congregation of the Missionaries of Africa (White Fathers), who was Secretary and President of the Pontifical Council for Interreligious Dialogue, then Apostolic Nuncio in Egypt, and Mgr. Eugenio Dal Corso, Italian, of the Poor Servants of Divine Providence, Opera don Calabria (PSDP), Bishop emeritus of Benguela, in Angola, who spent 11 years in Argentina, in the province of Buenos Aires, and 23 years in Angola.
These are the names of all the new Cardinals: Mgr. Miguel Angel Ayuso Guixot, MCCJ, President of the Pontifical Council for Interreligious Dialogue; Mgr. José Tolentino Medonça, Archivist and Librarian of the Holy Roman Church; Mgr. Ignatius Suharyo Hardjoatmodjo, Archbishop of Jakarta; Mgr. Juan de la Caridad García Rodríguez, Archbishop of San Cristóbal de la Habana; Archbishop Fridolin Ambongo Besungu, OFM cap, Archbishop of Kinshasa; Mgr. Jean-Claude Höllerich, SJ, Archbishop of Luxembourg; Mgr. Alvaro L. Ramazzini Imeri, Bishop of Huehuetenamgo; Mgr. Matteo Zuppi, Archbishop of Bologna; Mgr. Cristóbal López Romero, SDB, Archbishop of Rabat; Fr. Michael Czerny, SJ, the head of the Migrants and Refugees section of the Dicastery for Promoting Integral Human Development. In addition, Mgr. Michael Louis Fitzgerald, Archbishop emeritus of Nepte; Bishop Sigitas Tamkevicius, SJ, Archbishop Emeritus of Kaunas; Mgr. Eugenio Dal Corso, PSDP, Bishop emeritus of Benguela. (SL) (Agenzia Fides, 2/9/2019)

AMERICA - Message from CELAM: "Let us walk and pray together for peace in the world"

AFRICA/IVORY COAST - Mass for peace: Cardinal Kutwa asks the Head of State for pardon for some opponents

AMERICA/MEXICO - Pilgrimage of the Virgin of Zapopan