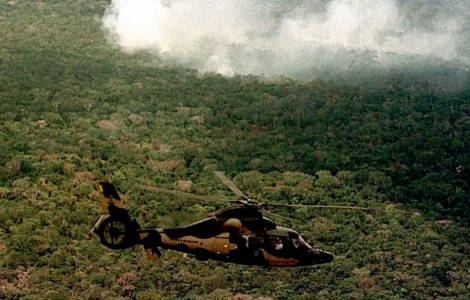 2020-05-23
Bishops: the health crisis has highlighted the problems that the State has never faced and solved

2020-04-16
Covid-19: the voice of mission among collapsing healthcare facilities, corruption and war scenarios

Guayaquil (Agenzia Fides) - "The situation is critical in all of the Amazon, especially in Brazil and Bolivia, where fires in recent days have reached an impressive extent, destroying thousands of kilometers of woodland area. We must call on all humanity to become aware of the serious consequences and threats that this situation could entail. We must engage in the 'care of the common home', looking for concrete ways of peaceful and resolving action. It is in everyone's interest". This is what Father Vincenzo Balasso, a Comboni missionary for thirty years in Ecuador, reported to Agenzia Fides. Since the beginning of the year there have been over 72 thousand fires with an increase of 84% compared to those of 2018 in the rainforest.
As the missionary explains, the Pan-Amazon region extends to nine South American countries, (Brazil, Bolivia, Colombia, Ecuador, Guyana, Peru, Suriname, Venezuela, including French Guiana as an overseas territory).
"The safeguard of this area is of vital importance because it affects our planet completely", stresses Father Vincenzo: "The Amazon basin, in fact, represents one of the largest reserves of biodiversity on Earth (from 30 to 50% of flora and fauna), of fresh water (20% of 'non-frozen fresh water of all the planet); it also has more than a third of the primary forests".
"Today, this enormous heritage - explains the Comboni priest - is threatened by the great economic interests that are concentrated in different points of the territory: the enormous growth of agricultural, mining and logging activities has damaged not only the ecological wealth of the region, but has also impoverished the social and cultural reality". "To this - he points out - is added drug trafficking that puts the survival of the peoples that depend on the animal and plant resources of these territories at risk".
Therefore, it is not only an environmental issue that is at stake, but also the protection of 390 indigenous peoples who live there: "The Amazonian peoples - says Father Balasso - have never been threatened as they are now: there are still residual traces of a past colonizer that generated representations of inferiority and demonization of indigenous cultures". "Each of these - he continues - represents a particular culture-identity, a specific historical heritage and a peculiar way of looking at reality and what surrounds them: these populations have a vision that could enrich everyone and make us rediscover the essentiality of life", he adds. "The specific reality of the Amazon - he affirms in conclusion - challenges the conscience of every believer and every person of good will today, so that his identity, his vital harmony, with the commitment to protect the 'common home' will be preserved, as Pope Francis states in Laudato Sì'. (ES) (Agenzia Fides, 31/8/2019)

ASIA/TAJIKISTAN - Drinking water and waste management: the Church operates in the spirit of Laudato Sì

ASIA/PHILIPPINES - After Covid-19, a "green change" in the economy is urgently needed, starting from agriculture

ASIA/TAJIKISTAN - Drinking water and waste management: the Church operates in the spirit of Laudato Sì

AMERICA/CHILE - Bishop-elect of San Felipe: "We need structures of justice"

AFRICA/BURUNDI - Elections: "Voting took place in a peaceful manner, but we have found several irregularities", say the Bishops