ASIA/BANGLADESH - Rohingyas have been in Bangladesh for two years: repatriation is difficult 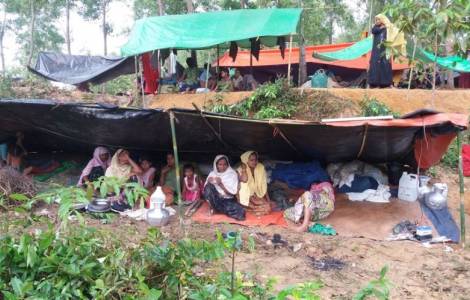 2020-12-29
Radio Veritas in Bengali, a station also listened to by Muslims, celebrates 40 years of proclaiming the Gospel

2020-12-03
Bangladeshi Christians ask for the release of Jesuit Fr. Stan Swamy in India

2020-11-26
The new Archbishop of Dhaka: priority to be given to the family, the “powerhouse” of the Gospel

Cox's Bazar (Agenzia Fides) - There is sadness and growing desperation among the 1.1 million Rohingya refugees who are currently camped in 34 refugee camps in Cox's Bazar, a Bangladeshi locality on the border with Mynamar: this was reported to Agenzia Fides by Jesuit Father Jeyaraj Veluswamy, who works as a member of the Jesuit refugee Service team (JRS). Two years have passed since the start of this great crisis on August 27th, which led to the massive influx of 945,000 Rohingya refugees in the Bangladeshi sub-districts of Teknaf and Ukhiya.
Although the government of Bangladesh had implemented all the provisions to repatriate an agreed number of 3,450 Rohingya refugees, none of the refugees on the list showed up. Furthermore, over the past two years, several thousand children have been born in the camps. According to the NGO "Save the Children", in 2018 there were over 48,000 new births in the camps and in January 2019 there were 64,000 pregnant women.
Following two failed repatriation attempts in November 2018 and August 2019, the Rohingya refugees now feel completely helpless and abandoned, confused and with an uncertain future. "They say they cannot hope to build a future, living in these cramped camps in Bangladesh", explained Father Veluswamy. On the other hand, thinking of returning home, the state of Rakhine, in Myanmar, without guaranteeing the safety of their women, girls and children and respecting their fundamental rights, is equally depressing.
Having welcomed the Rohingya in its territory, Bangladesh now feels the burden of having to provide for their needs and ensure their safety. Their presence is already the cause of multiple problems. The government of Bangladesh sought help and support from the international community and the United Nations, hoping to start repatriating 1.1 million displaced Myanmar citizens as early as June 2018. But so far all efforts have not led to the desired result.
The Jesuit recalls that in the past, faced with a similar crisis, thanks to the bilateral efforts between Bangladesh and Mynamar, supported by the UNHCR, the voluntary and safe return of 200,000 Rohingya refugees in 1978 and another 250,000 in 1992 was possible.
Almost everyone returned to their homeland in the state of Rakhine in western Myanmar and was able to recover their home, land and property.
Today Rohingya leaders have put forward five crucial demands as preconditions for their return to Mynamar: the recognition of their right to call themselves "Rohingya ethnicity"; full citizenship in Myanmar; security after repatriation; the return to their homes and lands lost in the conflict; justice for the crimes committed against them.
According to Fr. Jeyaraj Veluswamy the question of Rohingya's citizenship remains at the center of this decades-long crisis. By enacting the 1982 Burmese citizenship law, the Myanmar military regime had effectively deprived the Rohingya of that right and called them "aliens" who live illegally within Myanmar. The military regime of the Junta defined the list of "national races" or indigenous ethnic groups declaring licit only the 135 ethnic groups that lived in Burma before the arrival of the English in 1824. All other minorities, such as the Rohingya, the Indians, the Chinese , Nepalese, may require only lower-level citizenship, called "associated citizenship or naturalized citizenship". They are all excluded from the right of first level "full citizenship" which belongs only to the members of the 135 recognized ethnic groups. However, so far 40,000 Rohingya have managed to obtain naturalized citizenship in Myanmar.
A Burmese delegation led by U Myint Thu, foreign Secretary, visited the Rohingya camps at Cox's Bazar on 28-29 July. The Secretary clearly stated that the Rohingya "are not citizens of Myanmar according to the Constitution", but could still be legally allowed to reside in Myanmar by virtue of a permit, the "National Verification Card" which would be a step towards obtaining citizenship. Rohingya leaders are not convinced of the promise, based on their many years of negative experience.
In August 2019, JRS completes 18 months of accompaniment and service to the Rohingya refugees, in Cox's Bazaar. In collaboration with Caritas Bangladesh, JRS has extended its humanitarian service in the field of protection in the camp. As the Jesuit reports, the protection of Rohingya children is a major concern: children alone account for 55% of the total refugee population, which is estimated to be 945,000 refugees. Among them also about 6,000 orphaned children, alone or unaccompanied. JRS currently manages eleven "Child Friendly Spaces" in three camps in the Kutupalong mega camp, assisting over 3300 children in all. Here groups of various age groups are accompanied, following school programs, games, medical assistance, psychological and social support. Given the enormous need and urgency for the education of Rohingya children, JRS is exploring ways to engage in education and organize real and proper schools. (SD-PA) (Agenzia Fides, 30/8/2019)

ASIA/MYANMAR - Peaceful elections: towards a consolidation of the National League for Democracy

ASIA/KAZAKHSTAN - Family Christmas at the Ark Village, but generosity does not decrease