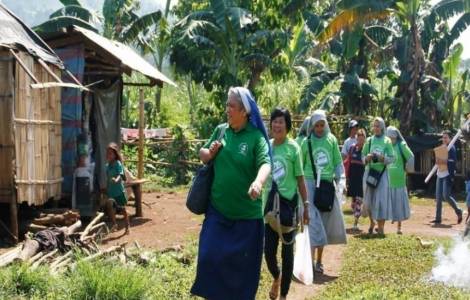 2020-05-22
Condition of the Rohingya: the Burmese government in the Hague

2020-04-30
A parish priest in Jerusalem: "Israelis and Palestinians expect solid and lasting peace"

Manila (Agenzia Fides) - Clergy, religious and lay members of the "Rural Missionaries of the Philippines" (RMP), involved at a pastoral and social level, celebrated their 50th founding anniversary, confirming the work to accompany and support the poorest, in remote or rural areas.
The Rural Missionaries of the Philippines is a national, inter-congregational and inter-diocesan organization, composed of religious men and women, priests and lay members who live and work with small farmers, agricultural workers, fisher folk and Indigenous Peoples. Founded on August 15, 1969, it is a Roman Catholic Church organization and a mission partner of the Association of the Major Religious Superiors in the Philippines.
"In the last 50 years, RMP has brought the Gospel and worked alongside poor communities in remote areas, promoting human dignity, rights, peace and social justice", says to Fides Sister Elsa Compuesto, the new National Coordinator of RMP, elected by the National Assembly of the organization in Manila in recent days.
"The next 50 years will be years of grace in which to work with the poor. We do not want to abandon our poor despite many difficulties, struggles, risks and challenges that our missionaries face together with the people we serve", remarked Sister Elsa, of the Congregation of the Missionary Sisters of Mary.
"Being part of RMP is a missionary commitment to live a prophetic call with the poor", specified Sister Elenita Belardo, outgoing National Coordinator.
RMP, always on the front line against injustice, has raised its voice against the killings of the poor by the police or the military for various reasons and violations of human rights. Bishop Deogracias Iniguez stressed the effort, commitment and contribution of RMP, whose members "are willing to work hard to bring the Church closer to people".
"The members of RMP are willing to sacrifice so much for the sake of the Gospel as they work for justice by denouncing evil and injustice", the Bishop said.
RMP is committed to serving farmers, indigenous peoples and fishermen "through collective testimony and prophetic action" and "to encourage people of good will "to support the rural poor" so that "they can enjoy the fruits of their labor and of the fullness of life, preserving the integrity of creation", reads the note of the organization.
Among other commitments, RMP facilitates integration and seminarians and men and women religious to carry out their evangelizing mission alongside the poor in rural areas; it carries out campaigns regarding problems of rural areas; provides support services to schools on topics such as evangelization, disaster risk reduction, health services, defense of human rights, sustainable agriculture and climate change mitigation; contributes to building alliances and networks of a pastoral and social nature. (SD) (Agenzia Fides, 21/8/2019)