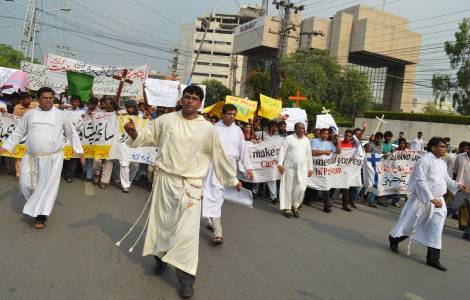 Karachi (Agenzia Fides): "We are faithful to our beloved homeland, Pakistan. We are not strangers: our Churches, religious institutions, hospitals and office buildings have a raised flag of Pakistan. We have lived in this land for centuries, well before the creation of Pakistan, and we are serving with honesty and dedication for the good of Pakistan". This is what Fr. Saleh Diego, vicar general of the Archdiocese of Karachi and diocesan director of the National Commission for Justice and Peace told Agenzia Fides, recalling the main issues and challenges faced by religious minorities in Pakistan. A specific Day, which is celebrated on 11 August, was established for them in 2010 by the then federal minister for religious minorities, the Catholic Shahbaz Bhatti, who was assassinated on 2 March 2011.
Fr. Saleh Diego also stated: "Christianity has existed in this territory since the first century, when St. Thomas, one of Jesus' apostles, came to the Indian subcontinent. We are 100% sons and daughters of this land; we should not be treated as second-class citizens".
Catholic lawyer Tabbasum Yousaf, speaking to Fides, recalled: "We members of religious minorities are contributing strongly to the development of Pakistan. We intend to focus on issues related to our freedom, our fundamental human rights, prejudices and discrimination that exist in particular towards people of religious minorities and forced conversions of women of religious minorities".
The lawyer presented a joint ten-point resolution that was signed by leaders and representatives of various faiths (Christians, Hindus, Sikhs and other faiths) and is addressed to the Prime Minister of Pakistan and other institutions. Among the requests contained in the text, the resolution points out that the minimum age for marriage of girls should be 18; calls for the establishment of a a federal ministry for religious minorities, and the application of a 5% quota for national and international educational scholarships given to minorities; the joint resolution urges protection of minorities' houses of worship from government seizure; designated minority worship areas in jails, hospitals, and state institutions; and the passage of legislation to prevent religious discrimination in employment, education, and society. Furthermore, the Memorandum calls for the elimination from books of material encouraging hatred. A specific request touches on the problem of abductions, sexual violence and forced conversions of women belonging to religious minorities, asking for legislation to counteract the phenomenon.
Commenting on the current situation, Majida Rizvi, first female judge of the High Court in Pakistan, and committed to the National Commission on the status of women, said: "At the time of the founding of Pakistan, Pakistan's founder Mohammad Ali Jinnah assured the equal rights, freedom and justice for religious minorities in Pakistan. Members of religious minorities contributed to the foundation and development of Pakistan; they have proven to be true citizens of Pakistan".
Sheema Kirmani, a well-known Muslim human rights activist, told Fides: "All Pakistani citizens are equal, the concept of considering a person on the basis of majority or minority criteria should be removed. We must also change the terminology and declare that Pakistan is a country with a people of various religions. There should be no religious divisions or discrimination".
Ghazala Shafiq, a Christian activist for women's rights, says: "In this country it is painful to note that the Constitution of Pakistan does not allow any non-Muslim to become president, prime minister, head of army personnel or any other top position". Moreover, "forced conversions of women belonging to minorities are on the rise: they should be stopped and severely punished". (AG) (Agenzia Fides, 19/8/2019)