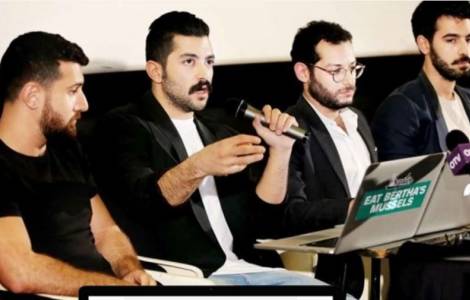 2021-06-15
Synod of the Maronite Bishops: "The supply of the Lebanese population is at risk"

2021-06-07
Cardinal Raï dedicates the land to the Immaculate Heart of Mary: "We are a people who will not die"

2021-06-04
Patriarch Raï's proposal: a "government of leaders" to tackle the crisis in the Lebanese system

2021-05-26
Farewell to Krikor Bedros Ghabroyan, Patriarch of the Catholic Armenians

Beirut (Agenzia Fides) - The cancellation of a concert by Lebanese band Mashrou ‘Leila from the program of the International Festival of Byblos continues to fuel mobilizations and controversies that also involve Churches and religious authorities in the Country.
The canceled concert of Mashrou ‘Leila should have taken place in Byblos yesterday evening, Friday 9 August. After the cancellation, young people and adults welcomed the invitation to go to Hamra to take part in a musical happening that saw the participation of all the singers and musical groups eager to show their solidarity to Mashrou ‘Leila. The concert, broadcast live on some television channels, and funded with a fundraising campaign launched through social networks, in fact turned into a protest against the limits of freedom of expression. Actors, directors and popular artists took to the floor to express their disagreement. Slogans were launched that claimed without distinction the urgency to mobilize for the defense of the rights of artists, homosexuals and refugees.
In the rampant discussions on social media, journalists, politicians and even members of ecclesial and religious communities underlined the fact that the prohibition of the concert had the effect of exacerbating polemical feelings towards the Church. Others reiterated that the choice to cancel the concert was right, given that the members of the band had in the past taken offensive poses against symbols of the Christian faith. In a televised debate, Mufti Ahmad Taleb defined the story as a sign of the lack of education and adequate religious culture in Lebanese society, although strongly influenced by the different denominational affiliations declined in terms of identity. "Freedom must take into consideration the context in which it is exercised", added Mufti Taleb, citing Imam Musa al-Sadr, who died in 1978.
Lebanese priest, Fadi Daou, of the Adyan association, cited the document on Brotherhood signed by Pope Francis and the Great Imam of al Azhar in Abou Dhabi to emphasize that religions are not against freedom, but against the exploitation of religious contents to threaten and offend the religious faith of others.
Lebanese Minister of Tourism, Avedis Guidanian, reiterated that despite the government measures taken to prevent the spread of controversial artistic messages and content, Lebanon remains a space of freedom.
The cancellation of the Mashrou ‘Leila concert was also requested by the bishopric of Jbeil (Arabic name of Byblos) and by the Catholic Information Center. In the controversy there were also interventions of political acronyms such as the Lebanese Forces. On Tuesday 30 July the Byblos International Festivalhad announced that the concert by Mashrou’ Leila was canceled over fears of “bloodshed”.
Formed at the American University of Beirut, the Band made itself known in recent years for the contentious content of its songs and for the controversies provoked on topics such as homosexuality and the coexistence of different religious identities. At the announcement of the concert, which was later canceled, the attacks on the members of the musical formation had multiplied on the social media, accused of spreading offensive texts against the Christian faith and also of inciting perversion and occultism. While on the other side other commentators and other acronyms, such as "Proud Lebanon" (an organization that wants to affirm the rights of LGBT groups in Lebanon), had deplored the attacks and threats against Mashrou 'Leila as an expression of obscurantism aimed at hitting freedom of expression. (PR) (Agenzia Fides, 10/08/2019)

AFRICA/LIBERIA - A missionary: "Alongside the people in a local Church that is taking its first steps"

AFRICA/IVORY COAST - The return of former President Gbagbo arouses the enthusiasm of his supporters; tensions with the police

VATICAN - Cardinal Tagle at the PMS Assembly: "In the pandemic, the missionary spirit of every baptized person awakens"