ASIA/JAPAN - A listening Center to accompany people suffering from loneliness 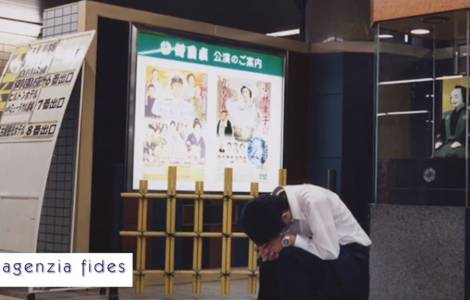 2019-11-25
The Pope to Japanese Catholics: to recognize God’s gift means to free ourselves from perfectionism

Koshigaya (Agenzia Fides) - "Japanese society is turning into a society without ties. The bond with one's homeland, with one's family, is becoming increasingly fragile. This loss is inevitably accompanied by the tragedy of solitude": this is what Father Marco Villa, Secretary General of the Pontifical Institute for Foreign Missions (PIME) tells Agenzia Fides, who for years worked as a missionary in Japan, where he founded the Listening Center in Koshigaya, a town about twenty kilometers north of Tokyo. "The Center intends to accompany people who are alone and welcomes especially those who need to cultivate a human relationship, to feel heard", he adds.
In a reality like the Japanese one, almost totally absorbed by work, with little free time available, it seems that there is very little space to dedicate to the meaning of one's existence, to the care of human relations and to religious experience: "I founded the listening Center - explains Father Marco - with a double motivation: to activate a form of service for the population and open a place of worship, in an area where there was no Catholic structure". The Center was opened in November 2011, with a Japanese name that means "glass of water": "The name - he continues - recalls a sign of attention and availability, but that refers to the words of Jesus who recommends charity towards the poorest as a measure of the faith of Christians".
In a Country where traditional households are progressively crumbling, with a very low birth rate - the government estimates that by the end of 2019 there will be 921,000 newborns, about 25,000 fewer than in 2018 - and where 30 % of the population is over 65, young people in particular "suffer from a situation that causes pathologies and often uncontrolled and dramatic effects", notes the Secretary General. In fact, the phenomenon of voluntary isolation in Japan (hikikomori) is spreading even among young people: according to data published by the Japanese Cabinet Office, more than 700,000 children lock themselves up at home and cut off all contact with the outside world. "Our commitment - he underlines - is to be close to the people, amplifying and allowing human dignity to emerge: every person has value first and foremost, because is a man or a woman". The service of the Center turned out to be promising in terms of Christian witness: "Some people who have attended the Center in these years have made a personal journey of faith and have been baptized", he adds.
Among the other challenges that the Church faces in Japan, there is a decline in vocations to consecrated life, to which has also been added in recent years even a smaller presence of missionaries from abroad. "Recently, missionaries are coming to bring their support, especially from the Philippines, South Korea and Vietnam", says Father Villa. "In a country where Catholics are just 440 thousand, that is 0.2%, out of a population of 145 million inhabitants - he observes - it is necessary to rethink an overall model of mission, both in the relationship with the priests and with the local laity". In conclusion, the secretary of PIME makes reference to the journey of Pope Francis to the Land of the Rising Sun, scheduled for the month of November: "There is a lot of enthusiasm - he reports - the Japanese Church is a small flock: the presence of the Pope will give breath, joy and strong encouragement to face the challenges that await her". (ES) (Agenzia Fides, 10/8/2019)