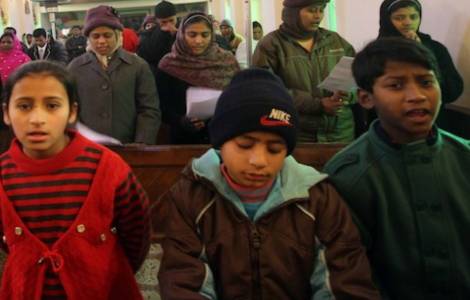 2020-09-19
Suicides on the rise: the Church offers online psychosocial support to people in difficulty

2020-09-10
The young Indian Catholic at the UN: Laudato Sì is a source of inspiration

Ranchi (Agenzia Fides) - "The situation in Kashmir is delicate and requires an effort on behalf of everybody, for peace and reconciliation, so that the situation does not degenerate: today let us accompany this moment with our prayer. We express our closeness to the people of Kashmir, who live again days of tension and suffering. We hope for a peaceful evolution, we pray for peace in Kashmir and in all of India": says to Agenzia Fides Bishop Theodore Mascarenhas, today auxiliary bishop of Ranchi, who was until recently General Secretary of the Indian Bishops’ Conference, expressing the concern and attention of the Indian Catholic community towards the situation in Kashmir.
With a provision approved by the lower house of the Indian parliament, India has revoked the "special status" in Kashmir guaranteed by the 1947 Constitution. The region in northwestern India, the only Indian state with a Muslim majority (68% of a local population out of 14.5 million inhabitants), will become a "Union territory", that is administered by the federal government, through a representative of the executive.
The decision has created protests and unrest in the territory, which has been deprived of autonomy. According to Fr. Shaiju Chacko, spokesman for the diocese of Jammu-Srinagar, the only Catholic diocese in Kashamir, "the decision – he notes in a conversation with Fides - could generate a further sense of distance and alienation between the local population and the central government, increasing the 'internal instability and the risks of violent radicalization, especially among young people', in an area where jihadist and extremist groups have already organized attacks in the past.
In the state there are riots and protests and Indian security forces (the government has sent a further 50,000 soldiers, in addition to the 60,000 already present) have arrested over 500 people, to prevent risks of other street demonstrations and possible terrorist attacks. Given the tension, about 20,000 pilgrims and tourists have been thrown out and Kashmir is isolated from external contacts. In a very tense and unstable social climate, notes Fr. Shaiju Chacko to Fides, "the local Church calls for prudence, and the necessity not to indulge in violent tendencies and to remain calm. We continue to work, at a pastoral and social level, for the good of the population. We ask the government in New Delhi for a gesture of reassurance and of reconciliation towards the local population that has already suffered too much". (PA) (Agenzia Fides, 8/8/2019)

AFRICA/IVORY COAST - One month of the presidential elections, a conference on "prevention and peaceful management of conflicts"