EUROPE/ITALY - Cardinal Filoni: I saw faith, not hatred, in the eyes of the persecuted because of Christ 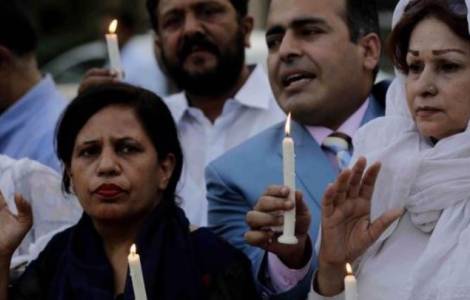 Concordia Sagittaria (Agenzia Fides) - Even today, the journey of the Church in the world is marked by "martyrdom and persecutions", by "real hatred even in countries of ancient Christian tradition and now also in those virtual places, the media (facebook, instagram, etc.), where anonymity often excites the worst of the human soul". And before all this, the distinctive signs of those who suffer because he/she bears the name of Christ are forgiveness and joy of being kept in faith, and not hatred or recrimination. This is what Cardinal Fernando Filoni, Prefect of the Congregation for the Evangelization of Peoples, reiterated in the homily during the Eucharistic liturgy celebrated on Saturday 3 August in the Cathedral of St. Stephen in Concordia Sagittaria, in the diocese of Concordia-Pordenone, on the patronal solemnity of St. Stephen Protomartyr. According to ancient tradition, on 3 August the Church commemorates the miraculous discovery of the relics of the first Christian martyr, in Jerusalem in 415 AD, by the priest, Luciano of Kefar Gamba. And it was precisely the story of St. Stephen that offered Cardinal Filoni the opportunity to repropose some essential traits that characterize the nature of Christian martyrdom.
"Stephen", the Cardinal remarked, "offered his life to bear witness to Christ before the furious legalists and scribes of the "Liberti" Synagogue in Jerusalem; people who, after hating and condemning Christ to the cross, now also hate him; just as Christ similarly died forgiving his crucifiers, also Stephen died forgiving those who condemned and stoned him".
The strength to confess the name of Christ before the persecutors does not express human heroism, but is only given to Stephen as a reflection of the same attraction exercised over his heart by Christ himself: "he was so in love with him", Cardinal Filoni recalled, citing the Acts of apostles that "his face was like that of an angel". The same source of grace manifests itself in imitating Christ to the point of sharing the miracle of his forgiveness towards the persecutors: "As Jesus had put his last breath back into the hands of the Father" recalled the Cardinal "Stephen imitates him entrusting his life to Jesus. This story of entrustment and forgiveness is an infinite story that runs through the whole life of the Church, from the ancient martyrs, even from this Land of Concordia-Pordenone, to the present day". Cardinal Filoni also spoke of his personal experiences that made him experience the mysterious victory witnessed by the events of martyrdom and persecution experienced by Christians: I can testify to you, as Prefect of the Congregation for the Evangelization of Peoples", the Cardinal said "of having been witness of suffering several times, but not of the hatred of so many Christians; I am thinking here, for example, of the face of the thousands of people, Christians, Yazidis, Khaki, etc., who were driven out in July-August 2014 by the so-called Caliphate terrorists who had captured Mosul and then the Nineveh Plain in Iraq; in those faces there was anguish, there was all the drama of those who had lost absolutely everything, but "not faith, or their own human dignity", as a lay Christian in the village of Alqosh expressly said to me: "I have nothing, but I have my faith!".

The Prefect of Propaganda Fide also pointed out the recent meetings in Sri Lanka with survivors of church attacks in that country, "where hundreds of Christians, and others, were killed by Islamic terrorists on Easter morning while attending Mass: women, children, men, the elderly. In the eyes of the survivors and relatives who showed me pictures of their loved ones on their mobile phones", the Cardinal said during the homily, "there was untold suffering, sadness and deep emotion, but not hate. "You will be hated by all because of my name, but whoever perseveres to the end will be saved". These are the words of today's Gospel and they came to my mind while I was listening and gathering the tears of destroyed families". (GV) (Agenzia Fides, 3/8/2019)

ASIA/TAIWAN - Young Vincentians: witness to the faith in society

OCEANIA/PAPUA NEW GUINEA - The bishops remember Blessed To Rot, second generation Christian, an example of persistence in these times of lockdown