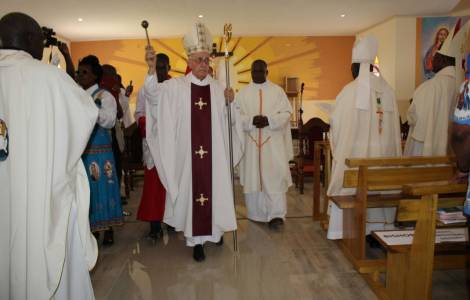 Rome (Agenzia Fides) - Cardinal Fernando Filoni, Prefect of the Congregation for the Evangelization of Peoples, will visit the diocese of Concordia-Pordenone for two events: the opening of the "Perdonanza Bibionese" and the Solemnity of the Titular of the Church Cathedral. On Thursday, August 2 at 9 pm, in the parish church of Santa Maria Assunta in Bibione, he will preside over the opening celebration, of this particular period dedicated to prayer, reflection and missionary solidarity, which will end on August 16th. Saturday, August 3 at 9.30 am, the Cardinal will preside over the solemn Eucharistic concelebration in the Cathedral of Saint Stephen in Concordia Sagittaria for the diocesan feast of Saint Stephen Protomartyr, in the discovery of his relics.
In an interview published by the Diocesan weekly "Il Popolo", Cardinal Filoni focuses on the figure of Cardinal Celso Costantini (1876-1958). Parish priest and Vicar General of this diocese, before being appointed the first Apostolic Delegate in China and then Secretary of Propaganda Fide. On 17 October 2017 the diocesan phase of the beatification cause of Cardinal Costantini was opened in the Cathedral of Concordia Sagittaria.
"We know a lot about Costantini's work, very much indeed - says Cardinal Filoni in the interview -. Some aspects still come to surface, in these days, the publication of some unpublished writings, which were kept in the historical diocesan Archive of Concordia-Pordenone. Costantini gave an impulse, under the pressure of Benedict XV's Maximum Illud, to reposition the missionary commitment in China. The great evangelizing commitment in the previous century, the nineteenth, needed to evolve relying on the direct commitment of the Chinese. It was a choice of the whole Church and he was the protagonist, and this gave important results. Today it is almost normal to think that China evangelizes China. At the time no.
It was a vision and there were prejudices. What we can see today is also the great fidelity, despite the many civil policies contrary to the Church, to the Catholic faith and to the Pope: it is the sensus fidei of the faithful. After Mao Tse Tung the Catholic community was not persecuted as believer in Christ (the Catholic religion is now one of the five admitted by the Chinese Constitution), but as faithful to Catholicity and to the Pope. Saint Ignatius of Antioch, Bishop and Martyr of I century, said that in front of persecutions Christianity is not supported with words, but with the strength of God. And in China it was like this".
Commenting on the historic agreement between the Holy See and China for the appointment of Bishops, the Prefect of the Congregation for the Evangelization of Peoples states: "Changes are and will be slow, as is tradition in China. This was the case at the time of the Empires, like today at the time of the People's Republic. However, after about sixty years of closure by the Communist Party, the big change is that, in the appointment of Bishops, the Pope and the Apostolic See have a role which was previously not allowed. This is a historical event. Dialogue will then continue to play its part".
Responding to the question about the characteristics of the mission in our days and the role of the Congregation, Cardinal Filoni points out: "Non-proselytism is not a choice of the Church today. Jesus was not a proselyte. He always proposed and, to those who asked, offered to go and see, to follow him in freedom. This was attractive and it was his missionary methodology. The Congregation for the Evangelization of Peoples invites with the proclamation of the Gospel, with the witness of life of the many missionaries (religious and lay), with the human commitment among the people (education, health, defense of the weakest, charity, culture, etc.) to rediscover that faith, a gift of God, is the answer to the deepest expectations of the human heart: if you want, come and follow me! The Church is a welcoming community for all peoples. Recently a missionary in Ethiopia gave me a grammar book, a vocabulary and the first translation of the Gospel in a language that had not been written up until that moment. This is the Gospel in the sense of the salt of the earth and the light of the world. An ancestral culture has entered history and life among peoples. We as a Congregation support the young Churches born out of the generosity of so many missionaries and the missio ad gentes that now must be done first of all by the young Churches inculturated in the Gospel. The missionaries continue their commitment and give their support". (SL) (Agenzia Fides, 31/7/2019)