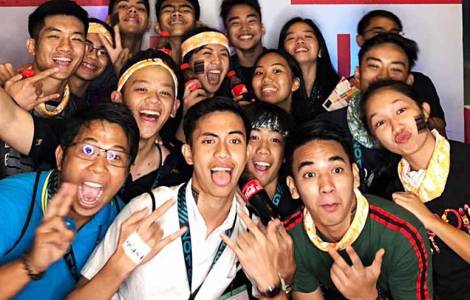 2019-12-23
Terrorist violence on Christmas eve: attack in front of the Cathedral

Manila (Agenzia Fides) - For Cardinal Luis Antonio Tagle, Archbishop of Manila, when it comes to evangelization and social communication, there is no room for individualism. In fact, there is always the "danger" that people working for the same cause end up working separately. "Therefore in the meantime the voice weakens and the impact diminishes", the Cardinal said in a note sent to Fides, on the occasion of the first anniversary of the "Voice of the Word Media Network" (VWMN). The media structure of the diocese of Borongan runs an AM radio, an online FM radio, 4 cable TV channels, a news service and a newspaper. Its contents are also disseminated through various social media platforms, including Facebook, Youtube, Instagram, Twitter and Spotify.
Cardinal Tagle, who also manages the Philippine Radio Educational and Information Center (PREIC), praised the initiative of "giving voice to the Word of God". "With communion for a common mission, we hope that our voice will be clear, unambiguous and that the impact will be greater", he said, stressing that the world of social media is a very powerful tool that must be evangelized. "Whoever brings the Word must receive the Word of God", he pointed out.
The Cardinal and the Filipino Bishops are promoting the "new evangelization" in the country with great commitment. Cardinal Tagle also led the sixth National Conference on New Evangelization (PCNE6) held from July 19 to 21, at the Dominican University of Santo Tomas, in Manila. This year's theme was "The Filipino Youth walking with Jesus", to celebrate the Year of Youth announced by the Bishops' Conference in preparation for the 500 years of Christianity in the country, in 2021. The Conference touched on various aspects related to the theme "Filipino Youth on Mission". "The Church in the Philippines belives in young people for evangelization", the Cardinal pointed out. In the Philippines, about 80% of the population, 105 million people, is Catholic. (SD) (Agenzia Fides, 25/7/2019)

OCEANIA/PAPUA NEW GUINEA - Extraordinary missionary Month: new technologies as a tool to "preach from the roofs"