AFRICA/UGANDA - Archbishop Rugambwa in Kampala: "Joy and Hope" for the 50 years of SECAM 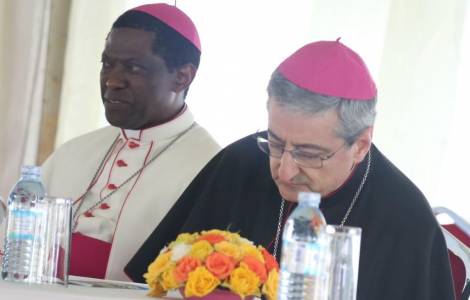 2020-07-21
Missionary Childhood Day: children can be saints even with the little means they have

2019-08-10
"The evils of Africa derive from wrong choices. It is time to change", says the President of Caritas Africa

Kampala (Agenzia Fides) - "This Jubilee is cause for joy and hope. Joy for the gifts of grace received over the past 50 years and hope for the work that will be accomplished in the years to come, with the grace of God". This is what Archbishop Protase Rugambwa, Secretary of the Congregation for the Evangelization of Peoples, said in his speech yesterday in Kampala, on the occasion of the XVIII Plenary Assembly of SECAM (Symposium of the Episcopal Conferences of Africa and Madagascar) which marks the closure of the Jubilee Year for the 50th anniversary of the Symposium.
"The creation of SECAM was and still is an authentic sign of God for the Church in Africa - said the Archbishop -. The Body can become a great force for the future of the Church in Africa. As such, it is our sincere desire that this anniversary will be an occasion for reflecting on and embracing spiritual and pastoral renewal, both on your part and that of the entire Church on this continent".
"Church-Family of God in Africa, celebrate your Jubilee! Proclaim Jesus Christ, your Savior" is the theme of the anniversary, in line with the Special Assemblies for Africa of the Synod of Bishops, held in Rome in 1994 and in 2009, and concluded with the publication of the Post-Synodal Apostolic Exhortations Ecclesia in Africa by Pope John Paul II and Africae Munus by Pope Benedict XVI. "The theme of your Jubilee celebration - underlined the Archbishop - establishes a special link between the past and the present and highlights the mission of the Church on this continent". Concerning the image of the Church, Family of God, particularly suitable for the evangelization of Africa, the Archbishop cited St. John Paul II in this regard, who hoped for an elaboration of the theology of the Church-Family "in all the riches contained in this concept", and Pope Benedict XVI: "we must commit ourselves to transmitting the values that the Creator has instilled in the hearts of Africans since the dawn of time".
Therefore Mgr. Rugambwa recalled the first visit of a Supreme Pontiff to Africa, in 1969, when Holy Father Paul VI attended the conclusion of the Symposium of African Bishops in Kampala, consecrated new indigenous Bishops, paid homage to the Martyrs of Uganda canonized by him in 1964 and conferred the sacraments of Baptism and Confirmation to twenty-two new African Christians. On that occasion Paul VI "strongly urged the Church in Africa to be aware of itself and of its great task throughout the continent: "By now, you Africans are missionaries to yourselves".
"The promotion of African cultures, which today is synonymous with inculturation, was an important point in the magisterial teaching of St. Paul VI, especially for Africa, although not exclusively. Paul VI, is a protagonist of African culture, deemed suitable for expressing the Christian faith". "The goal of inculturation, both yesterday and today - he later specified - is to allow the Church to emerge as authentically African yet always profoundly Christian and Catholic, as a sign of the saving presence of God in the very midst of the local realities in Africa".
Paul VI urged SECAM "to live with “collegial affect,” or “affective collegiality,” which gives rise to a deep concern on the part of bishops for other particular churches and for the Universal Church", and emphasized that "the Church in Africa is called to form “upright consciences receptive to the demands of justice, so as to produce men and women willing and able to build this just social order by their responsible conduct".
Archbishop Rugambwa calling to mind all that SECAM has done to help bring about growth and development in the Church in Africa, concluded by inviting to truly internalize and make our own the words of Pope Francis when he speaks of the need for transformation and conversion in the Church: "Counting on the help of SECAM, the Church in Africa, in her components and structures, is called to constantly reform herself and conform herself with greater fidelity to Christ". (SL) (Agenzia Fides, 22/7/2019)

AFRICA/SOUTH SUDAN - 'Your Word is a lamp for my feet': first edition of the Bible in Pazande has been delivered

EUROPE/LITHUANIA - Towards Mission Sunday: "Mission before a territory is a way of life", says a Salesian missionary in Vilnius

AMERICA/ECUADOR - "Young missionary disciples, builders of the civilization of Love": encounter of the Andean region