ASIA/JAPAN - The Bishops: "Next to Pope Francis, ten days of prayer for peace" 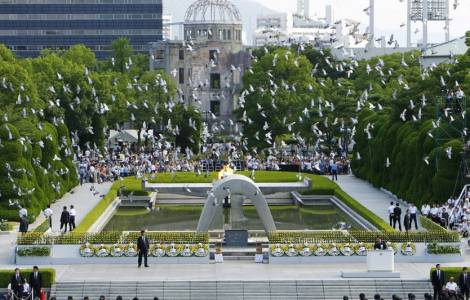 2019-11-25
The Pope to Japanese Catholics: to recognize God’s gift means to free ourselves from perfectionism

Tokyo (Agenzia Fides) - "With Pope Francis, we wholeheartedly pray to the God of peace that we can build peace by being deeply involved in the integral development of all while seeking the realization of the abolition of nuclear weapons. Let us begin that task by doing whatever we can": is the appeal issued by the Japanese Bishops in a message signed by Mgr. Mitsuaki Takami, Archbishop of Nagasaki and President of the Bishops' Conference of Japan. The text, sent to Agenzia Fides, recalls that "on February 25, 1981, Pope St. John Paul II made a striking peace appeal in Hiroshima. In response to that appeal, since the following year the Japanese Church has annually marked the Ten Days of Prayer for Peace, from August 6-15 to think about and pray for peace". The document of the Bishops confirms that "Pope Francis will visit Japan in November this year, 38 years and 9 months after John Paul’s Hiroshima Peace Appeal, and we look forward to his sending a new peace message to the world".
The Japanese Bishops recognize the Pope's global commitment to peace and reconciliation among peoples: "Since becoming pope, Pope Francis has from time to time made remarks regarding peace and the abolition of nuclear weapons. On July 7, 2017, the UN General Assembly adopted an historic Treaty on the Prohibition of Nuclear Weapons. On the previous March 23, the pope delivered a message to the UN General Assembly", indicating that issues such as terrorism, conflicts among those with different military power, and environmental issues, poverty, "intertwined in a complex way, threatening the peace and security of the modern world".
"However - the Japanese Bishops point out -nuclear threats cannot respond effectively to such issues. Stability based on fear simply increases fear and compromises trusting relationships among nations. In that case, we must ask ourselves how stability can be maintained". And they add: "International peace and stability cannot be based on a false sense of security, on the threat of mutual destruction or total annihilation, or on simply maintaining a balance of power. Peace must be built on justice, on integral human development, on respect for fundamental human rights, on the protection of Creation, on the participation of all in public life, on trust between peoples, on the support of peaceful institutions, on access to education and health, on dialogue and solidarity".
The leaders of the Japanese Church also recall that the Holy See was one of the first three countries to ratify the Treaty on the prohibition of nuclear weapons and that it sponsored a conference on nuclear disarmament. They conclude the message by quoting a passage from the Apostolic Exhortation "Evangelii Gaudium", which states: "A peace which is not the result of integral development will be doomed" (EG 219). (PA) (Agenzia Fides, 18/7/2019)

ASIA/MYANMAR - Buddhist monastic order to the military: call for an end to violence, it is urgent to start negotiations