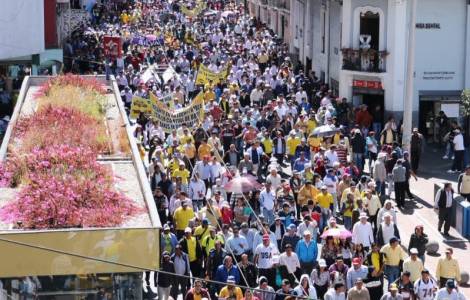 2020-01-17
Week of prayer for Christian unity: ecumenical meeting in Guayaquil on 24 January

2019-11-19
"One does not improvise to become martyr": the testimony of Fr. Moscoso, the first martyr of Ecuador

2019-10-24
After the protests: dialogue and reconciliation underway, with the mediation of the Bishops

Quito (Agenzia Fides) - The general strike has paralyzed Ecuador for two days now, with the population taking to the streets to protest against the corruption of the political class and the economic policies of President Lenin Moreno. The various demonstrations express the frustration against the government's latest provisions: layoffs, cuts in health and education sector, an increase in the cost of living and petrol. These are just some of the reasons that led to the general protest that is uniting the whole population to demonstrate every evening in the main squares of the country.
Yesterday peasants, workers and transporters, practically the labor force of Ecuador, took to the streets to make their voices heard against president Lenín Moreno, also accused of the possible reform of the labor market and credit agreements with IMF (International Monetary Fund).
The demonstrations have reached an international level: some national roads, particularly in Quito and Manabì, have been completely blocked by protesters, while Ecuadorians living in New York, New Jersey and Connecticut have protested outside the offices of the International Monetary Fund, in central Manhattan.
The Bishops’ Conference of Ecuador had sent Fides a few days ago a note prepared by Radio Latacunga, radio station of the homonymous diocese, which denounced the closure of the Claudio Benati hospital, located in the territory of the Zumbahua parish, with details of the consequences of this lack of health service for the population between Ambato and Quito.
After more than 25 years of activity, the hospital has developed in various directions. In addition to the interior layout, there is also an operating room, a modern analysis laboratory and a physiotherapy clinic, home visits service for the elderly, the chronically ill and malnourished children has become increasingly important and extended, which not only aim at health interventions but also at improving the living conditions of many families. The hospital serves mainly the indigenous peoples Zumbahua, Angamarca, Guangaje, Sinliví, Chugchilán. In 2018 it took care of 20,695 people, with 1,327 hospitalizations, 167 deliveries, 92 operations.
The economic management of the hospital is supported by the diocese of Latacunga and the central government of Ecuador, but after these last cuts to health, it will be one of the health care centers that will have to close due to lack of economic resources. (CE) (Agenzia Fides, 18/07/2019)

ASIA/LEBANON - Food banks in parishes, free medical services: the resilience of the Lebanese in the face of the crisis

ASIA/PHILIPPINES - Cardinal Tagle personally thanks and greets the faithful: "Do everything in the name of Christ"