ASIA/PHILIPPINES - Jolo Cathedral reopens: the future of the Church is entrusted to the Virgin of Carmel 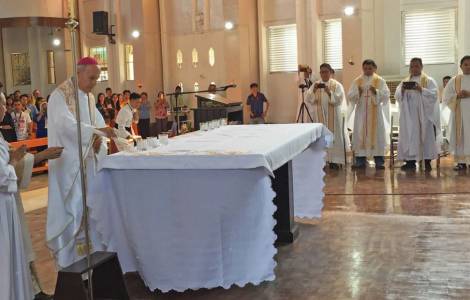 2020-02-12
"Happiness and sadness together", after the cancellation of the accusations against the bishops

2020-01-29
Evangelization, faith, dialogue: the Church of Manila in assembly

2020-01-28
Cardinal Tagle personally thanks and greets the faithful: "Do everything in the name of Christ"

Jolo (Agenzia Fides) - The future of the Church on the island of Jolo and in all the southern Philippines is in the hands and under the mantle of the Virgin of Carmel: with this spirit and with a special "act of entrustment to Mary, yesterday, the liturgical feast of the Virgin of Carmel, the cathedral of Jolo was reopened and re-consecrated, an island in the far south of the Philippine archipelago, almost six months after the attack of 27 January last, with two dynamite explosions, which killed 21 people and over 80 were injured.
The attack carried out by kamikazes, with two bombs: one exploded inside, the other outside the cathedral, was among the most serious in the nation's history. Only two days before, on January 25, the Muslim population in the southern Philippines - a community of over five million souls, concentrated above all in five provinces (Maguindanao, Lanao del Sur, Basilan, Sulu, Tawi-tawi) - had approved the Bangasamoro Organic Law with a referendum, the provision passed in Parliament that established the new "Bangasmoro Autonomous Region", named after the Islamic people who have lived in the south of the archipelago for eight centuries.
Now the Catholic community of Jolo (about 25 thousand Catholic faithful in an area that hosts 1.7 million Muslims) met yesterday, July 16, to celebrate Mass in the Cathedral of Our Lady of Mount Carmel, Patroness of the Apostolic Vicariate, now led by the Apostolic Administrator Fr. Romeo Saniel, missionary of the Oblates of Mary Immaculate (OMI). The Mass was presided by Archbishop Gabriele Caccia, Apostolic Nuncio in the Philippines, and concelebrated by numerous other Filipino Bishops, including Archbishop Romulo Valles, President of the Bishops’ Conference, Archbishop Angelito Lampon, former Vicar Apostolic of Jolo, today at the head of the Cotabato community, Bishop Edwin Dela Peña, at the head of the territorial Prelature of Marawi, President of the Commission for interreligious dialogue in the Philippine episcopate.
The Bishops, priests and faithful present expressed their joy for the restoration of the Cathedral. The attacks had caused serious damage to the building, now restored and reopened thanks to the contribution of Catholic organizations and international donors.
"Our mission today is to live, preach, witness the Gospel in a social and cultural environment with a Muslim majority", Archbishop Angelito Lampon explains to Agenzia Fides. "Let us put our lives in the hands of God every day and abandon ourselves to his will, carrying out a mission of dialogue and peaceful coexistence with the faithful of other religions. This peace mission - he explains - becomes a visible sign of a Gospel that announces and witnesses peace, reconciliation and mercy". (PA) (Agenzia Fides, 17/7/2019)

AFRICA/BURKINA FASO - A catechist killed in the north of the Country. Out of 6 parishes in the diocese of Dori, 3 are closed due to terrorism

ASIA/AFGHANISTAN - School for Down children: the mission of the nuns in Kabul

ASIA/SOUTH KOREA - Cardinal Yeom: "We entrust the brothers of North Korea to the Virgin Mary"