AFRICA/CHAD - The work of the "Good Samaritan", a pivot of the health system in Chad 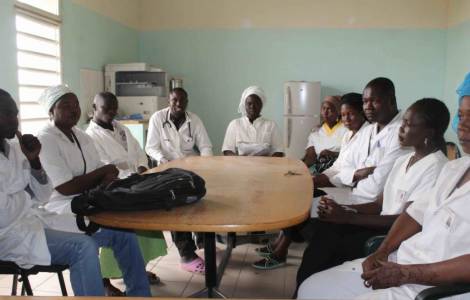 2019-10-14
Extraordinary Missionary Month: "We do not reach faith alone or through our own efforts" says the Bishop of Goré

2019-07-27
A cereal bank against exploitation and poverty

2018-10-11
Appointment of the National Director of the PMS, Fr. Barthélemy Kikina Wang-Tou

N’Djamena (Agenzia Fides) - The Catholic university hospital complex "Le Bon Samaritain" in Chad, a center of excellence in the nation, is 45 years old. The institute, founded in 1974 by the Jesuit from Bergamo, Fr. Angelo Gherardi with a group of faithful and friends gathered in the Association Tchadienne Communauté pour le Progrès (Atcp), has become one of the fundamental pivots of the health system in Chad.
The history of the complex begins a few years earlier. Returning to Chad in 1968, after studying theology, Father Gherardi became responsible for the Goundi mission: 40,000 inhabitants in an area of four thousand square kilometers, without public or private health facilities. The following year, however, the Institute of the Sisters of Charity of Saint Jeanne Antide Thouret agreed to finance the construction of a maternity hospital in Goundi and Jesuit brother Enrico Mafioletti, of the Province of Venice-Milan, was commissioned to build it. The opening takes place in 1974. A secondary nursing school is also created alongside the hospital. The first staff of the hospital is composed of a couple of doctors, former students of the Jesuit College Leone XIII of Milan, a Jesuit nurse from the Province of Milan-Venice, three Sisters of Charity and twenty Chadian nurses.
From 1974 to 1990 the structure functions like any conventional hospital: it has 120 beds with services such as pediatrics, maternity, internal medicine, surgery, operating theater, laboratory analysis and radiology. In 1990 there was an important step forward with the launch of the "Integrated Health Program" according to which health care activities, carried out in peripheral health centers, are coordinated with the activities of the hospital. The hospital obtains numerous health centers located between 20 and 30 kilometers in the surrounding territories. Between 1989 and 2015, the Atcp opens nine other health centers to "offer quality assistance to the people of Chad and create a favorable context for the study, training and education of students, especially the most disadvantaged, in rural and urban areas", explains a note sent to Agenzia Fides. Between 2004 and 2007, a medical school, a university hospital and a nursing school in 2008 were inaugurated in N'Djamena, the capital of Chad.
Father Gherardi's work continues to function regularly thanks to the support of many partners, including the Chadian government. Since it is important to ensure the continuity of the work of the founder, on 27 September 2015 "Le Bon Samaritain" passes under the direct management of the West African Province of the Society of Jesus.
Today the complex brings together 300 professionals in the two offices of N’Djaména and Goundi. General practitioners, nurses, midwives, and doctors of various specialties (surgery, pediatrics, gynecology) pool their skills to meet the needs of vulnerable populations. To these must be added about 50 medical students and 170 nursing science students. The complex avails itself of collaboration with several universities: the Pontifical University of Chile, the University of Reims in France, the Puerta del Mar University Hospital in Cadiz, Spain, as well as other universities and training facilities in Spain and Lebanon.
"The Society of Jesus does not have a specific charism (like the Camillians) for chaplaincy and hospital management", say the Jesuits of Chad to Fides. "Assuming the responsibility of the Good Samaritan - they explain - was a choice born from the attention towards the people of Chad that counts us among the very first missionaries who came from the country, to put into practice the preferential option for the poor. Training in the field of health care is now a precious help for the population, helping to create qualified medical personnel. The whole nation today greatly appreciates the service of the Faculty of Medicine of the Good Samaritan". (EC) (Agenzia Fides, 16/7/2019)

EUROPE/ITALY - Appeal from Christian associations and communities: Opening of "health corridors" for Iran and the urgent need to stop sanctions

AMERICA/VENEZUELA - Priests close to the sick and poor, even in this moment of the pandemic

AMERICA/ECUADOR - "From pain we build unity": call of Bishops to civil society, parties, government, in the face of the pandemic

AFRICA/EGYPT - From Patriarch Tawadros a spiritual thought a day, in the time of the global epidemic

EUROPE/ITALY - "Today you are Don Orione, no longer with the cassock, but with your white coat"