AFRICA/ANGOLA - Missionary from the bottom of his heart: 10 months since the abduction of Father Maccalli 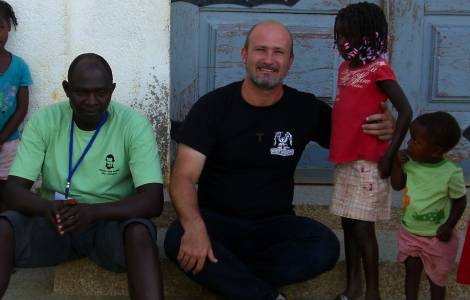 2019-07-15
Missionary from the bottom of his heart: 10 months since the abduction of Father Maccalli

2019-03-20
Appointment of the Bishop of Menongue, Leopoldo Ndakalako

2018-12-15
The elderly in Africa: Capuchin Centre for abandoned elderly people

Luanda (Agenzia Fides) - "Our communities in Angola are deeply involved and sensitive in the face of the abduction of Father Pier Luigi Maccalli. Our people suffer this absence with us, and hope with faith in his return", says Father Ceferino Cainelli, a missionary in Angola and recently elected new Provincial of the Italian missionaries of the African Missions Society (SMA), to Agenzia Fides.
"Father Walter Maccalli, older brother of Fr. Gigi kidnapped in Niger 10 months ago (see Fides, 17/9/2018), was an SMA missionary in Angola for 14 years until last year", says Fr. Cainelli. "The two Maccalli brothers are ‘missionaries from the bottom of their hearts’, as our founder Mgr. De Brésillac said. They carry the mission in their heart and blood. For this reason talking about the abduction of Fr. Gigi means to be united in a very special way with Walter and his family. In particular in parishes run by the SMA Fathers in Kikolo and Panguila, diocese of Caxito, people continue to pray in the various communities and to hope for his rapid release. His abduction invites us to live the mission at the service of the Kingdom of God to the full, where one day we, all men and women of the world, can call each other and recognize ourselves as brothers and sisters. Christian communities continue to pray and offer their sacrifice for his release. People show their closeness, they often ask us if there is any news, and show their discreet and charitable support".
In his story to Fides, Fr. Ceferino also speaks of the recent Ad limina visit of the Angolan Bishops to the Pope. "The Bishops were the voice of our Angolan people and they were not afraid to highlight the problems and challenges of the church and society today. The situation of poverty of so many of our brothers and sisters is one of the great concerns that our episcopate carries in its heart. Pope Francis encouraged the whole church in Angola to continue working for justice, peace and reconciliation. The Pope invited the entire Angolan church to engage in the search for solutions that contribute to building a more just and fraternal society. A new government policy suggests positive changes. As a Church we will have to rethink, reflect and commit ourselves in order to reach that common space, in which we all live as members of one and the same family".
The new Provincial also recalled that this year the 50th anniversary of the creation of the Bishops’ Conference of Angola and São Tomé (CEAST) was celebrated in Angola. "Among the pastoral urgencies of the Angolan church, in which the SMA operates, there is so much need to invest resources in the formation of the laity: young people, catechists, community leaders, group leaders and movements", insists Father Ceferino. "This challenge is motivated by their great desire for formation, as well as their great availability. Being a young and dynamic church, there are many young people who respond with joy and generosity to the call to follow Jesus Christ in the priestly and religious vocation".
"Discernment, accompaniment and formation of these vocations are the challenges of our mission. The Angolan church is investing in means to respond to this invitation, and continues to walk confidently on the path of the Good Shepherd", concludes Fr. Cainelli. (CC/AP) (Agenzia Fides, 15/7/2019)