AMERICA/ARGENTINA - Religious communities: "putting the most disadvantaged people at the center of social and political action" 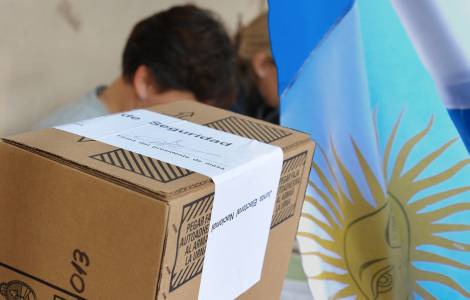 2020-01-14
Despite the maximum commitment of Caritas, the number of people in poverty is always high

2019-12-12
First speech by new President Fernández: "We must get out of this situation with solidarity"

2019-12-06
Sixteen million Argentines are poor, the Church calls for a social pact to assist them

2019-11-28
The Marian Year begins on December 8, in which the 500 years of the first Argentine Mass will be celebrated

2019-11-07
Bishops: "Need to overcome the various forms of violence and build social friendship"

Buenos Aires (Agenzia Fides) - "The electoral process does not have to necessarily mean crisis, because it is simply something that inevitably happens in democracies. Now it is necessary to revitalize democracy, not just to reduce it to an electoral act. Democracy atrophies, loses representativeness, becomes disenchanted if it leaves people out of their daily struggle for dignity and to build their future. Politics collaborates so that the people can become protagonists of its history and so it avoids that the so-called "ruling classes" believe they can fix everything".
This is an excerpt from the message that the religious communities present in Argentina published in view of the October elections, when the Argentines will have to choose the president and the vice-president, and also 130 representatives in the chamber of deputies and 24 in the federal senate.
The message, sent to Fides, is published on the occasion of the national holiday, July 9, as "from the roots comes the strength that makes us grow, prosper and bear fruit", and explain: "The Argentine people are born in the fraternal space of Latin American solidarity that cannot be erased from historical memory. A people that for over two centuries has been enriched by different migrations, with their cultural and religious riches".
The choice of candidates offers the opportunity to promote a dialogue on the present and the future, the text continues. "The culture of dialogue as a path, respect for others as behavior and having in every project those who suffer most from poverty and exclusion as a criterion and method, must be priorities. There is no true freedom without fraternity, and this is not given without the concrete realization of social rights".
The religious ask the candidates "to present their ideas and projects with clarity and realism, without falling into useless aggressions that end up discrediting the proposals" and recall that "politics is the highest vocation of man in the community and allows us to build the desired fraternity". Furthermore, "transparency and personal honesty, together with transparency in the institutional role of each of the powers, have an indissoluble relationship with the well-being and trust of citizens".
Finally they underline the need to start a new path, "leaving the era of diagnosis once and for all", since "every inhabitant of this country knows that structural poverty, drug trafficking, job creation, care for life, environmental crisis, inclusive education, inflation, the demands of the elderly and the absolute protection of childhood, are questions that are resolved with state policies beyond alternation, understanding that the results of each period should have continuity. The nation has already been founded, it is not refounded every four or eight years".
In conclusion, the religious communities reaffirm their task: "to help remember that behind the figures and crises, there are faces, names and stories. This is a permanent invitation to put the most disadvantaged people at the center of social and political action".
The message is signed by the President of the Argentine Bishops' Conference, Mgr. Oscar Ojea; by the President of the Christian Alliance of the Evangelical Churches of the Argentine Republic (Aciera), pastor Rubén Proietti; by the President of the Argentine Federation of Evangelical Churches (FAIE), Pastor Néstor Miguez; by the President of the delegation of the Asociaciones Israelitas Argentinas (DAIA), Dr. Jorge Knobiovits; by the President of the Islam Institute for Peace, Sumer Noufouri: by the presbyter Guillermo Marcó and by the rabbi Daniel Goldman, of the Institute of Interreligious Dialogue (IDI). (SL) (Agenzia Fides, 13/7/2019)

AMERICA/PERU - Message from the Bishops: Elections are a great opportunity to influence the course of events