ASIA/AFGHANISTAN - Concrete steps towards peace, but some dubious details remain 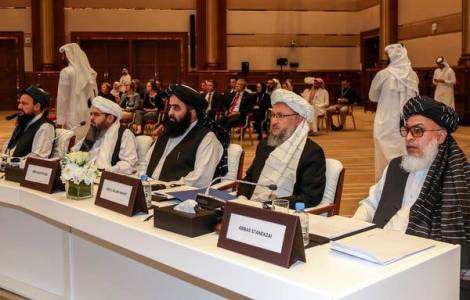 Doha (Agenzia Fides) - "In Doha, two meetings were held in recent days. The first is the intra-Afghan dialogue, between the Taliban delegation and some representatives of the Afghan society and government. The other was the seventh round of talks between the Taliban delegation and Trump's envoy, Zalmay Khalilzad to ink a peace deal with the armed group, which wields considerable influence in the country.
The Taliban, which has repeatedly refused to negotiate with the Western-backed Kabul government, agreed to join the meeting on the condition that the attendees do so in a personal capacity.
It seems, in fact, that the Taliban have finally accepted the fundamental point for Khalilzad, that is the idea that the agreement must be a complete package, made up of the following points: US troop withdrawal from Afghanistan, a ceasefire and a Taliban guarantee to not allow foreign forces to use the country as a staging ground for foreign attacks". This is what researcher Giuliano Battiston told Agenzia Fides, regarding the results of the recent negotiations that took place in Qatar between the end of June and the first days of July.
The opening of the fundamentalist movement to dialogue with the Afghan government is an important step forward: "Until recently, the Taliban claimed that they would not talk to the government of Kabul, which was considered illegitimate because it was the "puppet" of the Americans. In recent times, however, they have begun to demonstrate their willingness".
It seems, however, that the acceptance of the points of the agreement passes through the controversial request of the Taliban, expressed in the final document of the intra-Afghan meeting, of an "institutionalization of the Islamic system". This point, not well articulated within the document, could make us fear a return to the past. In this regard, Battiston explains: "The pro-government have good reasons to argue that even the current institutional architecture, the Republic of Afghanistan, is a fair compromise between the institutions of liberal democracy and respect for Islamic values. But the Taliban want to bring home a victory, even a symbolic one, on this point, and they have long said that the Constitution must be reformed. If this happens, it all depends on how it will be done: because it is possible to carry out this reform by following mechanisms established by the Constitution itself and, more generally, by Afghan law, or it can be done with more "political" acts that meet the demands of the Taliban. The truth is that not even the latter know what they want, what institutional architecture to build. But they also know that the Islamic Emirate of Afghanistan, their government-regime in the nineties, is now out of the question, because society is different, expectations are different".
On the eve of the negotiation, Barnabite priest, responsible for the Missio sui iuris in Afghanistan, Father Giovanni Scalese, had entrusted the negotiations to the Sacred Heart of Jesus: "We firmly believe that Jesus Christ is the Lord and King of the universe, He wants to reign over all nations. And his kingdom is "a kingdom of truth and life, a kingdom of holiness and grace, a kingdom of justice, love and peace". (LF) (Agenzia Fides, 12/07/2019)