AFRICA/ANGOLA - Drought emergency: 2.3 million people in a state of food insecurity, of whom 490,000 are children 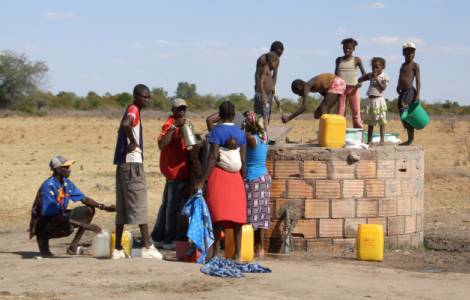 2019-07-15
Missionary from the bottom of his heart: 10 months since the abduction of Father Maccalli

2019-03-20
Appointment of the Bishop of Menongue, Leopoldo Ndakalako

2018-12-15
The elderly in Africa: Capuchin Centre for abandoned elderly people

Chiulo (Agenzia Fides) - In the south of Angola, in the provinces of Cunene, Huila and Namibe, a state of emergency due to drought has persisted for over six months, with very serious repercussions on the health conditions of the local population, especially children . The note sent by the NGO "Doctors with Africa CUAMM" to Agenzia Fides launches an appeal to combat malnutrition, ensure clean water and other urgent interventions to improve the conditions of the hospital in Chiulo, which is situated at the centre of the area affected by the drought emergency.
The province of Cunene, where the hospital of Chiulo is located, is a semi-desert area, but in recent years the rainfall has been less and less frequent and this year there has been no rainy as Carlo Caresia, the project's chief doctor, tells us: "As we feared, in the dry season, we see the results of the lack of water. In the villages, often very far from the hospital, real emergency is underway: lost grain crops, severely malnourished women and children, men forced to leave villages to go in search of water and fodder for livestock in the North. Even the hospital of Chiulo has been without running water for several months, with very serious repercussions".
At the height of the dry season, the Angolan government estimates that 2.3 million people today face food insecurity: of these, over 490,000 are children under five. According to UNICEF data, in the province of Cunene the rate of acute malnutrition has doubled in recent months: from 3.7% in the rainy season, to the current 7%, with over 8,000 severely malnourished children, in addition to the 20,000 in the province of Huila. Of these children, very few come to the hospital to be treated: it is estimated that less than 10% of the expected cases arrive in the malnourished unit at the hospital in Chiulo. (SL) (Agenzia Fides, 11/7/2019)