VATICAN - The Pope will hand over the Pallium to 31 Metropolitan Archbishops, 13 of the territories of Propaganda Fide 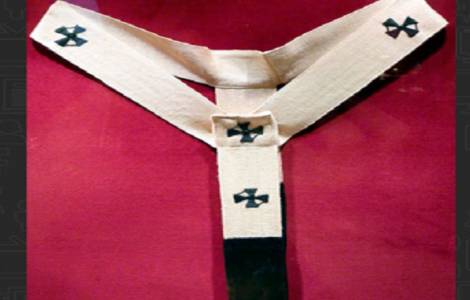 Vatican City (Agenzia Fides) - In the celebration that will preside in the Vatican Basilica for the Solemnity of the Holy Apostles Peter and Paul, Saturday, June 29, the Holy Father Francis will bless and hand over the Pallium to the new Metropolitan Archbishops appointed during the course of the year. The Pallium, symbol of the bond of communion between the Pope and the See of Rome with the Churches of the whole world, will be imposed by the Pontifical Representative to each Archbishop during a celebration that will take place in the respective particular Churches.
The Pallium was already in use in Rome in the fourth century. In its current form, is a circular sash of material, made of white lamb's wool, with two flaps of equal length and width that fall on the chest and shoulders, decorated with six embroidered black crosses. The Pallium is worn by the Pope and the Archbishops, above the chasuble, in the most solemn celebrations.
The Pope will hand over the Pallium to 31 Metropolitan Archbishops, 13 of whom are Ordinaries from territories entrusted to the Congregation for the Evangelization of Peoples, from Africa (8), Asia (4) and Oceania (1).
Their names, in order of appointment: Mgr. Zeferino ZECA MARTINS, SVD, Archbishop of Huambo (Angola); Mgr. Fridolin AMBONGO BESUNGU, OFM Cap, Archbishop of Kinshasa (Democratic Republic of the Congo); Mgr. Philip A. ANYOLO, Archbishop of Kisumu (Kenya); Mgr. Joseph VU VĂN THIÊN, Archbishop of Hà Nôi (Viêt Nam); Mgr. Antoine KAMBANDA, Archbishop of Kigali (Rwanda); Mgr. Elias Joseph GONSALVES, Archbishop of Nagpur (India); Mgr. Kornelius SIPAYUNG, OFM Cap, Archbishop of Medan (Indonesia); Mgr. Gervas John MWASIKWABHILA NYAISONGA, Archbishop of Mbeya (Tanzania); Mgr. John Bonaventure KWOFIE, CSSp, Archbishop of Accra (Ghana); Mgr. Renatus Leonard NKWANDE of Mwanza (Tanzania); Mgr. Michael Jude BYRNES, Archbishop of Agaña (Guam); Mgr. Mark TIN WIN, Archbishop of Mandalay (Myanmar); Mgr. Dabula Anton MPAKO, Archbishop of Pretoria (South Africa). (SL) (Agenzia Fides, 28/6/2019)