VATICAN - Vocations increase in mission territories, their formation is the responsibility of the whole Church 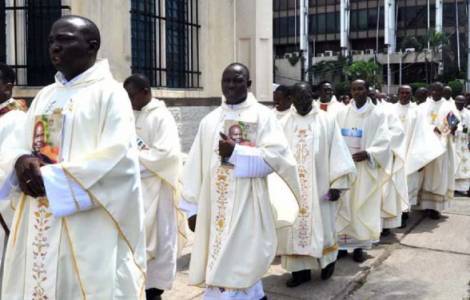 Vatican City (Agenzia Fides) - "Priestly and religious vocations continue to blossom in the so-called 'mission' countries, as a sign and fruit of the vitality of faith, and these regions are already turning into missionary Countries, which in turn send priests and religious to other Churches". This was underlined, in a conversation with Agenzia Fides, by Fr. Guy Bognon, PSS, Secretary General of the Pontifical Society of St Peter the Apostle (POSPA) since last July. "The formation of the young, whose number increases every year - he continues - requires well-trained formators, structures and infrastructures. Unfortunately, POSPA is not always able to respond positively to all requests due to lack of funds".
The Pontifical Society of St. Peter the Apostle is one of the four Pontifical Mission Societies. It was founded in 1889 in Caen, France, by Mrs. Jeanne Bigard, with the support of her mother Stephanie, under the inspiration of the Apostolic Vicar of Nagasaki, Mgr. Jules-Alphonse Cousin, MEP missionary Bishop, who wanted to form local priests in Japan to announce the Gospel to their people. The purpose of POSPA is therefore to support, with prayer and economic help, the formation of the local clergy in mission Churches, as well as that of candidates for religious life, male and female.
"In the year 2019, in which the universal Church celebrates the Extraordinary Missionary Month - recalled Fr. Bognon -, some significant dates occur for us: on June 1 we recalled the foundation of the Society, which took place in 1889, 130 years ago. December 2, 2019 marks the 160th anniversary of the birth of the foundress of the Society, Jeanne Bigard (1859-1934), while April 22 was the 85th anniversary of her death. Even if these dates do not constitute a jubilee in the usual sense, they are still an opportunity to talk about POSPA: in many Countries, in fact, after more than a century of life and continuous commitment, little is known about the Society".
Faithful to its objectives of taking care of "quality formation" for future priests, the Society carries out its ordinary work on several levels. "We consider the formation of formators to be important - highlights Fr. Bognon - which we ensure through in-depth meetings and scholarships. Formation sessions were organized in Rome, in some countries of Asia and Africa. In some countries annual meetings were scheduled, while for many others the will to organize this kind of formation clashes with the lack of financial resources. However, these study sessions prove to be very important, even necessary, if we want to continue to form quality priests for the Church of today and tomorrow".
As regards to the support for formation through scholarships, POSPA supports some students studying in Catholic universities or colleges in Cameroon, the Democratic Republic of the Congo, Ivory Coast, Kenya, Nigeria, Tanzania, Belgium. Most of them are preparing to become formators in seminaries or religious houses. This year there are 302 priests, men and women religious. For two years an experimental program has begun in favor of future formators belonging to Congregations or religious institutes of diocesan law. For this academic year 2018-2019 scholarships have been granted to 21 men and women religious of Ghana, DR Congo, Malawi, Nigeria. "The formation programs of the formators are of paramount importance if we are to help the Church overcome the challenges of the quality and credibility of consecrated souls", said Fr. Bognon.
The Society also collaborates with the Center of Child Protection (CCP) of the Gregorian University of Rome, financing each year the formation of 6 priests and women religious, "so as to have competent persons in the field of protection of minors", underlines the Secretary General.
Fr. Bognon recalls that in 2018 POSPA sent ordinary subsidies to 737 seminaries among minor, preparatory and major in Africa, Asia, Oceania and Latin America. Specifically: 383 minor seminaries with 47,556 seminarians; 125 preparatory seminaries with 4,703 seminarians; 229 major seminaries with 24,500 major seminarians. POSPA also contributed to the formation of novices in 1,200 novitiates: 2,882 male novices and 5,212 female novices for a total of 8,094.
"To these ordinary supports - explains Fr. Bognon - we need to add extraordinary subsidies, as the increase in vocations involves the expansion or restructuring of existing seminaries or even the construction of new ones. We receive continuous requests from Rectors and Bishops who ask us for help in making the environment of the seminary more functional and suitable to ensure the peaceful formation of future priests. Unfortunately we are often forced to wait a long time for our response due to the lack of available funds".
Father Bognon, who was born in Benin, attended the seminaries in his country and completed his formation in Toulouse, Montreal, Rome and Jerusalem, stresses that thanks to the efforts of the national Directions of the Pontifical Mission Societies, despite the continuous decline of offers registered in these past years, last year there was a turnaround, especially thanks to some African countries and the United States.
Furthermore, the seminaries have been urged to devise forms of self-financing, even through the commitment of the parishioners towards their future pastors. "In most seminaries - he explains - these activities have already been carried out or expanded, not only for daily subsistence, but also to get used to the sense of responsibility, to the humble work that brings the future priest closer to the concrete life of his faithful of tomorrow ".
"The Pontifical Society of Saint Peter the Apostle was born sensitizing all the laity to participate in the mission of the Church, by supporting the formation of priests in mission territories - concludes Fr. Bognon -. It is a concept that is still current, prompted by the new ecclesial reality, which we find at the base of the Extraordinary Missionary Month of October 2019, which intends to reawaken in every baptized the responsibility of the missio ad gentes and missionary charity". (SL) (Agenzia Fides, 28/6/2019)

ASIA/INDONESIA - The Bishop in Flores: "The boom in vocations arises from faith lived in the family"

AMERICA/BRAZIL - Letter of commitment from seminarians: "we cannot speak of vocation excluding the mission"

EUROPE/ITALY - The Orionine in the year of Youth: "Live every encounter in the sign of charity"