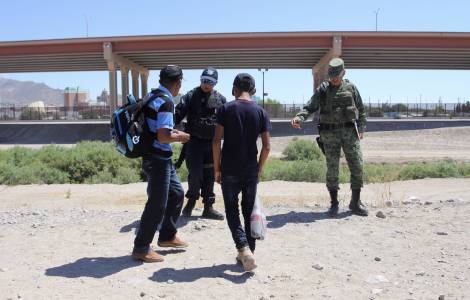 2020-01-20
The Bishop of Tapachula: in the face of the ambiguous and hesitant official position, it is important to "see, listen to and treat migrants as brothers"

2020-01-18
Week for Christian unity: "a unity that does not exclude anyone, especially the most disadvantaged, and among these migrants"

2020-01-09
Bishops appeal at the beginning of the year: let us stop war and violence, the result of intolerance and interests

2019-12-17
Reaching out to migrants: joint initiative of the frontier dioceses of Brownsville and Matamoros

Mexico City (Agenzia Fides) - Surveys on the opinion of Mexicans regarding migrants in the national territory continue to increase, the results are then disseminated by the media. In five months, from November 2018 to April 2019, the number of Mexicans who do not want to allow migrants to enter the country has increased from 32% to 58%, according to a new survey carried out by a well-known Popular Inquiry Institute, Parametria. According to the survey, the percentage of those who have taken a neutral position on the issue has dropped from 20% to 3%.
Meanwhile, the Mexican political-military intervention at the country's borders becomes more decisive. Over the weekend the authorities strengthened efforts to discourage Central Americans from crossing Mexico to reach the United States, arresting migrants in the south and deploying the National Guard in the north, along the Rio Grande.
In Arriaga, a city in the southern state of Chiapas, the Associated Press reports that about 100 migrants were arrested on Sunday, while Milenio TV reported that another 146 were taken from a private home in the central state of Queretaro, and more than 100 are were taken away from a hotel in the state of the Gulf of Veracruz.
Behind the pressure of the United States, the Mexican government has in fact deployed some 6,000 National Guard officers this month, its new militarized police force, along the southern and northern borders. In Ciudad Juarez, in the south of El Paso, Texas, the National Guard rejected migrants trying to cross the border over the weekend. The guards are patrolling along the Rio Grande.
"The National Guard, in theory, should not repress those who want to cross the country to go to the United States", said Isabel Sanchez, coordinator of a civic group in Ciudad Juárez that deals with security and justice. However, the greater rigidity in terms of immigration has today a popular support in Mexico. More than half of Mexicans interviewed by the newspaper El Universal in early June stated that the authorities should not allow migrants to enter the country and that those found traveling without a visa while crossing Mexico should be expelled.
Faced with this situation, after the meeting of the Mexican Episcopal Conference (CEM) with the President of the Republic (see Fides, 18/06/2019), CEM’s Presidency stressed that "greater joint collaboration is needed to guarantee the safety of migrants". On the occasion of the recent World Refugee Day, CEM denounced the militarization of borders, inviting them to develop a migration strategy that "must be based on human rights and put the migrant at the center of political and social measures, ensuring better conditions for an orderly and safe migration"(see Fides, 21/6/2019). (CE) (Agenzia Fides, 24/06/2019)