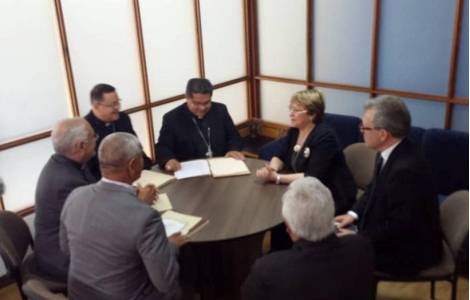 2020-11-18
Despite the economic and social crisis and the pandemic, vocations to the priesthood increase

2020-10-19
The Bishops: "the country calls for a change of attitude of all political leaders"

2020-09-28
Migrants: a reality of suffering for many Venezuelans

Caracas (Agenzia Fides) - The serious crisis that Venezuela is experiencing, which caused the mass exodus of many Venezuelans, was the subject of the Bishops’ meeting with the United Nations High Commissioner for Human Rights, Michelle Bachelet, who during her visit to the country met with representatives of the government, the opposition, organizations and civil society.
In the afternoon of June 21, the High Commissioner met a delegation of the Venezuelan Bishops’ Conference (CEV) led by its Secretary General, Mgr. José Trinidad Fernández, who delivered a letter signed by the CEV Executive Commission presenting the situation and a solution to get out of the crisis.
"The Catholic Church in Venezuela since 2004 has denounced the situation of the serious humanitarian crisis that our people are experiencing", is what is written in the text delivered to Mirelle Bachelet, published by local media and sent to Fides. The Bishops reaffirm that they are "defenders of life in all its aspects", their commitment is "to listen to the cry of our people". Then they list the increase of a massive diaspora and new forms of slavery, including human trafficking, prostitution, the situation at the border, the increase in child malnutrition, lies passed off as truth, the problem of petrol.
Continuing the description of the situation, the Bishops highlight "the electricity crisis in all of Venezuela, with the exception of Caracas, to give the feeling of normality to those who visit the country"; the lack of water that does not reach homes; the increase of suicides; school drop outs due to poverty, lack of food and transport; "The precariousness of food which, in the face of high costs, makes it impossible to purchase basic products"; the serious public health situation that results in the lack of medicines and the depressing conditions in which hospitals find themselves. The plundering of the environment with the extraction of mineral wealth and the exploitation of indigenous populations, which is associated with illegal extraction, is also deteriorating the Amazon.
Faced with this serious situation of violation of human rights, the Bishops therefore ask for the intervention of the High Commissioner, presenting their requests to the government: the recognition of NGOs and the permission to allow supplies for humanitarian assistance to enter; the release of political prisoners and the elimination of police stations as detention centers; the end of abusive practices that violate human rights by different State security groups.
The Bishops therefore demand that their "electoral, political and economic rights" are returned to Venezuelans and reiterate that the fundamental solution to the crisis "is the election of a new president and the recognition of the National Assembly as a body elected by the people".
"The country's crisis is rooted in corruption and impunity - they conclude - in the face of looting of public resources and is not simply due to the sanctions that have been imposed. Before these sanctions Venezuela was already in a depressing economic situation. The serious humanitarian crisis is resolved if those in power seek the common good of all". (SL) (Agenzia Fides, 24/6/2019)

ASIA - Commitment of Catholic mass media in Asia for the promotion of peace, truth and solidarity in times of pandemic

AFRICA/DR CONGO - Ten years after the presentation of the UN Mapping Report, victims are still waiting for justice