ASIA/PAKISTAN - Appeal of civil society: Need to implement the protection of minority rights 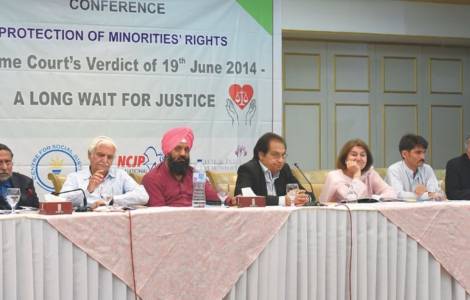 2020-08-01
The construction of a Hindu temple stops after the opposition of Islamic groups: religious freedom at stake

2020-07-29
Urdu news: the new information service on Radio Veritas to be launched, to build peace and unity

2020-07-17
Civil society to the government of Punjab: religious freedom in the educational system

2020-07-08
Bishops: concern over the increase in violence against religious minorities

Islamabad (Agenzia Fides) – Need to implement the order of the Supreme Court for the protection of minority rights, issued on June 19, 2014 and has remained a dead letter: is the appeal launched during a conference of the Pakistani civil society organized in recent days in Islamabad by an organization forum such as: Center for Social Justice (CSJ), Human Rights Commission of Pakistan (HRCP), National Commission for Justice and Peace of Catholic Bishops (NCJP) and Cecil and Iris Chaudhry Foundation (CICF). As Agenzia Fides learns, academics, jurists, human rights activists, religious leaders, Christian exponents have called for a timely and effective implementation of that sentence by the Supreme Court. During the conference a report prepared by the CSJ was launched, entitled "A Long Wait for Justice", which analyzes respect for justice in Pakistan and the failure to implement that important sentence of 2014. The organizations present invited the federal governments and the provincial governments to "undertake stringent and urgent measures to enforce that Supreme Court sentence", still without being implemented.
The NGOs recall several problems reported in that unresolved sentence: security of places of worship; a policy for religious and social tolerance; the establishment of a National Commission for Minorities; the implementation of quotas reserved for minorities in public workplaces; the reform of school curricula. All to guarantee the fulfillment of minority rights.
The experts present again approved the recommendations included in the sentence and in the Report presented, especially supporting the urgency of establishing a National Commission for the Rights of Religious Minorities.
Speaking at the assembly, Archbishop Joseph Arshad, President of the Commission for Justice and Peace called on the government to fulfill the commitment made by the founder of the country, Muhammad Ali Jinnah "to guarantee equal rights for all citizens of Pakistan".
Speaking to those present, Ibn Abdur Rehman, a well-known human rights activist, stated that "this verdict establishes the basis for the protection and promotion of religious freedom in general and, in particular, for the protection of minority rights". The executive director of the Center for Social Justice, Peter Jacob, evaluating the sentence, stated that "compliance is weak and sporadic, with overall compliance levels not exceeding 24%," noting "the lack of will among decision makers".
Former Senator Farhatullah Babar reiterated the need to "create an organization to help change the current mentality towards citizens and minority communities", while Haris Khali, Secretary General of the HRCP, said "the movements in civil society are necessary to promote the values of tolerance and pluralism among all religious communities". Finally, Abdul Hameed Nayyar, a professor of physics, noted the need for education reform, "to remove all the hate material taught in schools and universities and to make education a means of promoting peace, respect and acceptance of diversity". (PA) (Agenzia Fides, 21/6/2019)

OCEANIA/AUSTRALIA - Bishops of different confessions on Ayasofia: "Division is not the result of religious wisdom"