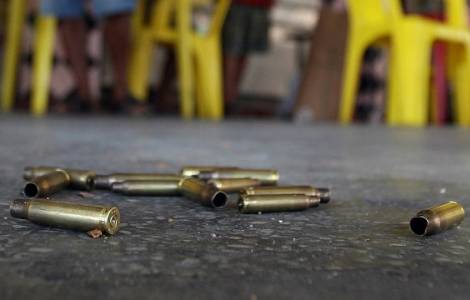 2020-07-18
The Bishops in the face of the current situation: "We are committed to life and human dignity"

2020-07-04
"We cannot get used to crime and violence and be indifferent to death": the diocese in the face of the massacre of Irapuato

Chiapas (Agenzia Fides) - A catechist instructor was shot dead in the municipality of Acacoyagua, in a chapel in Chiapas state - another example of how the violence consuming Mexico is impacting the Catholic Church. The Bishop of the Diocese of Tapachula (Chiapas), Mgr. Jaime Calderón Calderón, in a video sent to Fides talks about the dynamics of the murder: "We were victims of the generalized violence that exists in the country. Yesterday (Saturday, June 15) at the end of catechists' training course in the church of the Immaculate Conception, of San Marcos Evangelista parish, two young men entered and started shooting, one of the bullets injured Margeli Lang Antonio, who died almost immediately. We are close to her family. As a diocesan family we cannot get used to these facts of violence that demonstrate a social and moral degradation of the human community". Mgr. Calderón asked the authorities to find those responsible as soon as possible.
During a press conference on Sunday afternoon, June 16, the Bishop stressed that "social decomposition is due to a lack of integral health of communities. When there is no work, when there is injustice, when there is impunity, when there is an excessive ambition for money, when people's lives have a price, what is put at the center is money, then everything has a price and whoever has the money is the one who commands ... When there are changes of the government there is a certain emptiness of authority and power ... ", the Bishop concluded.
Yesterday Fides received the statement of the Bishops’ Conference of Mexico (CEM) on the meeting of the CEM Presidency with Andrés Manuel López Obrador, President of the Republic, in order "to begin fraternal dialogue with the will to collaborate in the construction of a more just society". The Bishops, the statement said, touched two fundamental themes: migration emergency and the construction of peace.
Regarding the first, "the Church continues to offer its resources: 95 dioceses, 10 thousand parishes, more than 130 hotels and thousands of pastoral workers throughout the Mexican territory engaged in the humanitarian mission and in the defense of human rights". The Presidency of the CEM therefore stressed that "greater joint collaboration is needed to guarantee the safety of migrants".
On the second issue, the Bishops intend to give their contribution to the reconstruction of the social fabric and the strengthening of the rule of law, through the Peace Building Plan, "which includes listening centers, centers for the defense of human rights, accompaniment of the victims and peace education workshops". "The suffering of so many Mexican families for violence and insecurity urgently calls for our fraternal collaboration", the text emphasizes.
The CEM statement concludes by recalling that other topics were also discussed at the meeting, and stressed that the Church intends to fulfill its mission by participating in the search for the common good, "in a line of positive secularism, in which the full exercise of religious freedom strengthens democracy". (CE) (Agenzia Fides, 18/06/2019)

AFRICA/ZIMBABWE - The Covid-19 crisis aggravated by the strike of nurses, exacerbated by low wages and corruption