AMERICA/BRAZIL - President of the Rural Workers Union assassinated: violence and murders in the Amazon increase 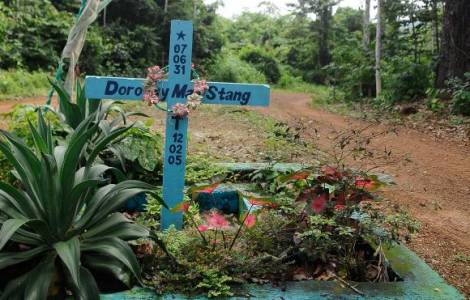 2019-10-29
Bishops on beach pollution: there is no future for humanity without respect for the common home

Parà (Agenzia Fides) - The Pan-Amazon ecclesiastical network (REPAM) of Brazil repudiates the violent action and the attack that killed leader, Carlos Cabral Pereira, president of the Union of Rural Workers (STR the acronym in Portuguese ) of Rio Maria, in the south-east of Pará, shot to death in the afternoon of Tuesday 11 June. Cabral Pereira had already been the target of an attack in 1991, when he was wounded in an ambush.
According to the report of the Pastoral Land Commission (CPT) "Conflitos no Campo", in 2018 49% of the 1,489 conflicts recorded in Brazil occurred in the Amazon region. Of the 960,630 people involved in the conflicts, 62% (599,084) are in the Amazon. The state of Pará leads the number of murders and attempted murders.
"Faced with this incident and many other cases of homicides related to agrarian conflicts in the state, we ask that the public authorities to take the necessary measures in the investigation and resolution of the case, as well as establish public policies in order to guarantee and protect many men and women who are threatened every", reads the statement sent to Fides.
"We express our solidarity with the family of Carlos Cabral, his friends and all the leaders threatened and persecuted in the countryside, especially in Rio Maria, informally called" the land of the announced death", and we ask the authorities to act with determination in the fight against impunity so that, in this way, violence in the region ends", concludes the statement.
According to a note from the Federal Public Ministry (MPF), with Cabral Pereira the number of murdered leaders of the STR rises to four: one in 1985, another in 1990 and the last in 1991. Violence in this area of Brazil has forced the CPT to dedicate a section of its annual report to these numbers, data and situations that confirm the importance of the figure of the leader among the peasants in the Brazilian forest and the abandonment by the state that does not protect them.
The CPT had to create "the Atlas of conflicts in the Amazon" to illustrate this terrible and unresolved situation. Only in Brazil it covers the states of Acre, Amapá, Amazonas, Tocantins, Pará, Rondônia, Roraima, Mato Grosso and Maranhão. Communities feel this violence a lot as an affront to their kind of life and peaceful coexistence. Since the assassination of missionary Sister Dorothy Stang in 2005 (see Fides, 10/7/2017), they feel that it is also a violence against representatives of the Catholic Church. (CE) (Agenzia Fides, 14/6/2019)