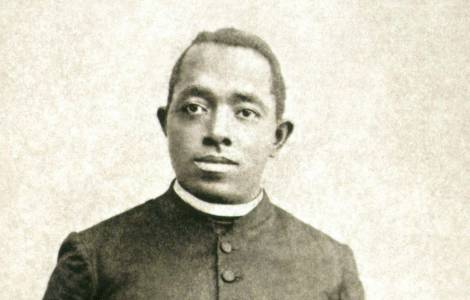 Vatican City (Agenzia Fides) - American priest Agostino Tolton (1854-1897), the first African American Catholic priest, and the lay religious of PIME Felice Tantardini (1898-1991), a missionary in Myanmar, are among the new venerable servants of God of whom the Church has recognized the heroic virtues. On 11 June the Holy Father authorized the Congregation for the Causes of Saints to promulgate the relevant decrees.
Agostino Tolton was born in Bush Creek, Missouri USA on April 1, 1854. The mother, in order to escape from slavery, moved to Quincy, Illinois, together with her children, while her husband died in hospital after fighting for the freedom of the Negroes in the 1861 civil war. The Toltons had been baptized in the Catholic faith by decision of the Elliott family, a white Catholic family. In Quincy, Agostino was looked upon with suspicion, offense and threatened, both by his companions and by their parents, and this is why he was sent away from various schools. Thanks to the help of some priests and nuns, he was able to continue his studies, until he entered Quincy College, as well as doing his First Communion and Confirmation. He excelled at school, and he collaborated in the religious education of the little ones. After being rejected by all the diocesan and religious seminaries, in 1880 he was finally welcomed in Rome, in the College of Propaganda Fide, he was 26 years old. On 24 April 1886 he was ordained a priest in the Basilica of St. Giovanni in Laterano in Rome.
He thought he was going to be a missionary in Africa, but the day before his ordination he was told he would return to the United States. On 18 July 1886 he returned to Quincy, but racial prejudice and envy prevented him from carrying out his ministry, although he was loved for his goodness and simplicity by both whites and blacks. Then he moved to Chicago, in 1889, to serve the local black Catholic community, in a basement. In 1891 the construction of a proper church was necessary. Father Gus, as he was called, became a familiar figure in the streets of the black ghetto, where he brought hope and comfort to the poor lands of the slums of the southern part of the city. Father Tolton died at the age of 43, in Chicago, on July 9, 1897, due to a heatstroke that had hit the city causing many victims, while returning from a retreat of priests. Thousands of people attended his funeral, including his mother and sister.
Felice Tantardini, a lay missionary consecrated to life in PIME (Pontifical Institute for Foreign Missions), called himself "the blacksmith of God" and in the art of working iron he had trained many young Burmese during the 70 years spent on a mission in Myanmar. He was born in Introbio in Valsassina (Lecco) in 1898, he had studied until the third grade and then went to be a blacksmith. He was a soldier in the First World War, then entered PIME and left for the then Burma, now Myanmar, in 1922. He died on March 23, 1991, at 93, after 70 years of mission with a single return home in 1956.
He was at the service of the missions and where the Bishop sent him, he went and did everything according to need: blacksmith, carpenter, gardener, farmer, nurse, sacristan, master builder. Always with a smile on his face, witty, helpful - as described by his confrere Father Piero Gheddo - he always traveled on foot, capable of traveling 50 kilometers a day on mountain and forest paths with 30-40 kilos on his shoulders and for several days in a row. He got up at 4:30 in the morning, went to sleep at 10 pm He recited his three daily rosaries and in the evening did an hour of adoration.
He loved the poor and gave away everything he had and received. In decades of intense work he built churches, schools, parish houses, hospitals, seminars, orphanages and convents. His fame spread throughout Burma, so much so that at his funeral a considerable crowd participated, also Buddhists and Muslims. Many then began to invoke him as "the saint with the hammer". (SL) (Agenzia Fides, 13/6/2019)

AMERICA/UNITED STATES - Assembly of Bishops concluded: racism among the most debated topics