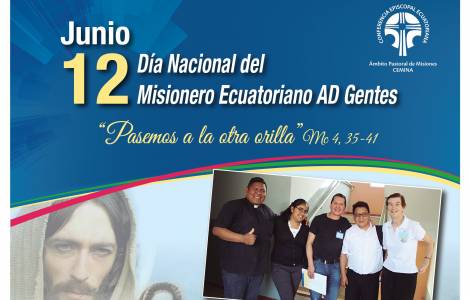 2020-01-17
Week of prayer for Christian unity: ecumenical meeting in Guayaquil on 24 January

2019-11-19
"One does not improvise to become martyr": the testimony of Fr. Moscoso, the first martyr of Ecuador

2019-10-24
After the protests: dialogue and reconciliation underway, with the mediation of the Bishops

Quito (Agenzia Fides) - "On the occasion of the celebration of the Ecuadorian missionary ad gentes, we wish to thank all the Ecuadorian missionaries who left the place where they were born to go to another needy land to bring the good news of the Gospel of Jesus". This is what the Bishops' Conference of Ecuador writes on the occasion of the "National Ecuadorian Missionary Day ad gentes" which is celebrated on June 12, the feast of Blessed Mercedes de Jesus (1828-1883).
Mercedes de Jesus Molina was beatified by St. John Paul II during his pastoral visit to Ecuador, in Guayaquil, on February 1, 1985. Her liturgical memory was set for June 12, the day of her death. The Bishops' Conference, on 24 April 2015, during the Plenary Assembly of Bishops, declared her motherly patroness of Ecuadorian missionaries "ad gentes", who celebrate the Day dedicated to them on the day of her liturgical feast. The idea for this day was born in 2014, during the assembly of the National Missionary Center (CEMINA).
The note of the Bishops' Conference, sent to Fides, explains that the title of "missionary ad gentes" is given by the Church to priests, consecrated or lay missionaries, "who work in the territories recognized by the Church as territories of mission ad gentes"; just as the Church did in the beginning with the first missionaries, like Paul and Bernaba, who were sent to bring the good news of the Gospel to the Gentiles.
In Ecuador, there are 8 ad gentes missionary territories, under the jurisdiction of the Congregation for the Evangelization of Peoples. Six Apostolic Vicariates in the Amazon region: S. Miguel de Sucumbíos; Aguarico; Napo; Puyo; Méndez-Macas; Zamora. One in the coastal region: Esmeraldas. One in the island region: Galapagos.
The Day of 12 June, according to CEMINA, wants to remember, give visibility, celebrate the missionary spirit beyond borders. It invites us to thank the Lord for the Ecuadorian missionaries ad gentes, to reflect on the missionary mandate of Jesus and on the recommendations of Pope Francis. On 12 June, celebrating the mass for the evangelization of peoples, it will be possible to present photos and information about their missionaries. It is also suggested, with the help of the parish missionary group, to decorate the church with the colors of the five continents and with the flags of the countries where the missionaries are located, as well as promoting a meeting or a day of reflection on the theme of the mission ad gentes, in order to promote and encourage new vocations.
Mercedes Molina, patroness saint of Ecuadorian missionaries "ad gentes", was born in Baba (Los Ríos, Ecuador) in 1828. After her parents died, she moved to Guayaquil, with her older sister and led a comfortable life. On the eve of her wedding, following a fall from a horse, she contemplated Jesus on the way to Calvary, and began a life of penance, mortification and fasting. Later she stripped himself of all possessions, money, jewels, precious clothes, and joined the Recogidas, in Guayaquil, taking care of the orphan girls.
In 1870 the Jesuits invited her to a mission located in the eastern part of Ecuador. She crossed arduous and inaccessible paths, experienced loneliness. The mighty rivers of the Ecuadorian Amazon threatened to interrupt her journey several times. Nevertheless, none of these extreme experiences succeeded in extinguishing the fire for the mission that burned in her heart. She was the first Ecuadorian woman to enter this area of the jungle and quickly became a consolation for the Shuar tribe, who she did not abandon even during the smallpox epidemic. In Riobamba, on April 14, 1873, she founded the first Ecuadorian female religious Congregation, the Santa Marianna Institute of Jesus. She died on June 12, 1883. (SL) (Agenzia Fides, 11/6/2019)