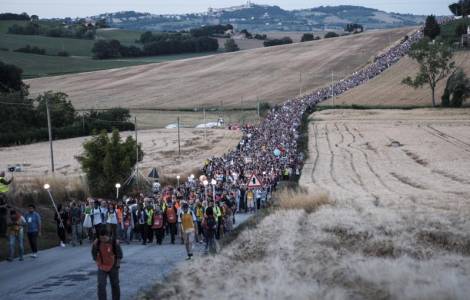 2021-06-01
Feast of Blessed Scalabrini, Apostle of migrants: we welcome the Pope's appeals

2021-05-29
Interreligious prayer for Myanmar: Buddhists and Christians call for peace

2021-04-28
Scalabrinians: humanitarian shame in the Mediterranean demands a response from the States

2021-04-27
The General Council of Comboni Missionaries: let us pray for many people who in South Sudan suffer from insecurity and violence

Rome (Agenzia Fides) - On the evening of Pentecost, since 1978, thousands of people from all over Italy and also from other nations, of different traditions and cultures, have given life to the now traditional pilgrimage from Macerata to Loreto on foot. For this 41st edition, the Pilgrimage invites to pray in particular for the Extraordinary Missionary Month of October 2019, announced by Pope Francis on the centenary of the Maximum Illud of Benedict XV, to reawaken in all the baptized the awareness of the mission ad gentes and to resume the commitment to proclaim the Gospel with new enthusiasm.
At the end of the pilgrimage, in Loreto, Archbishop Mgr. Giampietro Dal Toso, Assistant Secretary of the Congregation for the Evangelization of Peoples and President of the Pontifical Mission Societies, will entrust the missionary mandate to all the pilgrims, and give them a crucifix.
Before the general audience on Wednesday 5 June, in St. Peter's Square, Pope Francis blessed the "Torch for Peace" of the 41st Macerata-Loreto Pilgrimage on foot, which will reach Helvia Recina stadium in Macerata on Saturday 8 June, after a route of about 300 kilometers, covered by twenty-five athletes, mainly from Marche, Puglia and Umbria regions. In addition to the athletes, Mgr. Giancarlo Vecerrica, creator of the pilgrimage, Bishop emeritus of Fabriano-Matelica, Mgr. Fabio Dal Cin, Archbishop of Loreto, and Mons. Giampietro Dal Toso, President of the Pontifical Mission Societies greeted the Holy Father.
On the evening of June 8th, the arrival of the Torch is expected at Helvia Recina stadium in Macerata, where the traditional tripod will light up, before the Holy Mass presided by Cardinal Gualtiero Bassetti, President of CEI. At the end a representation of the walk runners will take part in the journey towards Loreto.
Father Fabrizio Meroni, PIME missionary, Secretary General of the Pontifical Missionary Union (PMU), Director of the International Center for Missionary Animation (CIAM) and of Fides, explained the link between the Marian Pilgrimage and the Extraordinary Missionary Month which has the theme "Baptized and Sent, the Church of Christ on mission in the world". "The Marian pilgrimage is above all the movement of faith animated by the maternal presence and supported by the example of Mary's mission in the midst of humanity", said Fr. Meroni in an interview published on the website of the Pilgrimage -. To set out on a journey driven by the love for Jesus and for humanity in need of salvation, manifest in the form of prayer and sacrifice what the mission constantly brings to life for the whole Church. If one loves and is loved, like the Virgin Mary, he moves, creates relationships, seeks the other, is filled with the joy of being able to meet him, of being able to pray for him and with him. We move towards the common destiny of the love of Jesus that saves us for eternal life, that constantly sends us on a mission worried about the destiny of each one and the salvation of all". (SL) (Agenzia Fides, 8/6/2019)

ASIA/IRAQ - Initiatives to relaunch pilgrimages to Ur of the Chaldeans, after the visit of Pope Francis

ASIA/INDONESIA - The Camillians in Flores: keeping missionary commitment alive and looking to the future with hope

AMERICA/VENEZUELA - The parish priest in times of pandemic: joint meeting of Bishops and priests