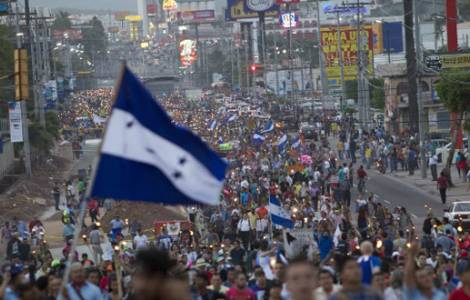 2020-04-17
Human rights do not disappear nor lost when crossing borders: hundreds of migrants stranded in Honduras

2019-12-23
Bishops' appeal against violence and corruption: a truce for Christmas

2019-12-05
"We must continue to fight corruption", said Mgr. Garachana Pérez, supporting the renewal of MACCIH

Tegucigalpa (Agenzia Fides) - The Honduran Bishops, gathered in the Plenary Assembly from 3 to 7 June, in their "Message of the Bishops’ Conference of Honduras (CEH)" indicate the main problems encountered which concern the community: the high cost of living , crime and violence, unemployment, serious deficiencies in the health and education system, corruption.
"But there are other problems – is what is written at the beginning of the text sent to Fides - that are equally likely to provoke conflicts, as or even more serious than those we are experiencing these days, in reference to health and education: problems in the form of legislation of the National Congress of Honduras, problems in the decisions of the Executive, in the crisis of state companies, in the services regarding energy, water, transport, etc. If every problem leads to conflicts like the one we are experiencing, and if every conflict is handled with the same inefficiency, the consequences can precipitate Honduras into a crisis that will be very difficult to overcome".
In this situation the Bishops note that "the indignation of the majority of the population, the suffering of the poorest, the disappointment of the young, the fear of migrants, the anguish of the sick, the impotence against corruption and impunity, the struggle of those who fight for a better Honduras without seeing the results, becomes even more painful and understandable".
In the message the Bishops say they believe that "the seriousness of the conflicts is due, first of all, to the wrong way in which they are managed by the powers of the State".
Regarding the popular reaction, CEH reiterates that "demonstrations of protest must be peaceful". "The responsibility of the police is to guarantee order and the security of the entire population", even if at times the police make use of "disproportionate force, adding another serious element to the conflicts".
The Bishops' analysis presents itself with harsh and concrete tones, as has rarely happened in the history of the country: "We are very worried about the future of our Honduras".
Below is a list of critical points: "The Constitution violated every time it is needed, powers that are not independent at all, Congress that has become a theater of false reprehensible actors, turning its back on the people. The need for an electoral power that guarantees the transparency of votes and outlaws electoral crimes once and for all. State institutions destroyed by corruption, the paralysis of economy, especially in agriculture, the shameful sale of the natural resources of our land. A false reform of the penal code that simply becomes a tool for the protection of the corrupt, which punishes the most "dangerous", who are then the marginalized and the poor young people in a desperate search for survival".
This first part of the document concludes with the proposal to change the country: "We are very worried about the moral decline in which our country is sinking. It is never right to do evil to obtain good". The second part focuses on some points on which action is urgently needed, such as "respect for law ... trust ... political ethics ... truth ... true dialogue". "We want to appeal to the whole society - concludes the text – let us begin to be aware that a change is possible as the commitment to achieve it in solidarity". (CE) (Agenzia Fides, 7/6/2019)

AFRICA/ZIMBABWE - The Covid-19 crisis aggravated by the strike of nurses, exacerbated by low wages and corruption

AMERICA/COLOMBIA - "We must have faith": a child kidnapped in Colombia released