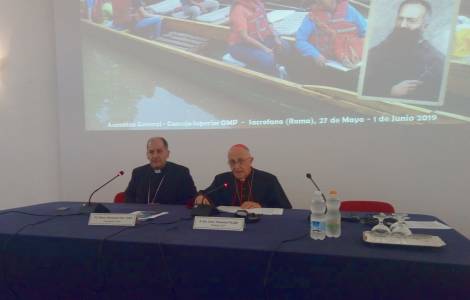 Rome (Agenzia Fides) - The celebration of the Extraordinary Missionary Month of October 2019, the formation of catechists in mission territories, the need to identify new forms of prayer, mission animation and fundraising for the missio ad gentes: these are the three themes addressed by Cardinal Fernando Filoni, Prefect of the Congregation for the Evangelization of Peoples and President of the Supreme Committee of the Pontifical Mission Societies, in his speech to the Annual General Assembly of the PMS, held at Fraterna Domus in Sacrofano (Rome) until 1 June (see Fides, 24/5/2019).
The Cardinal, who intervened yesterday afternoon, stressed first of all the importance of the Apostolic Letter Maximum Illud of Pope Benedict XV, which gave life to the "fruitful evangelical renewal of the ecclesial mission", whose centenary Pope Francis wanted to celebrate with an Extraordinary Missionary Month.
With his letter Pope Benedict XV wanted to achieve essentially three objectives, recalled Cardinal Filoni: "First of all he invited the whole Church and the local Churches, to take charge of the mission by not delegating to it only particular religious institutions and congregations. Secondly, to evangelically redevelop the mission meant for him to recall that the Church's mission has the sole and exclusive object of proclaiming the Gospel, faith and the witness of charity. The third aspect consisted in the explicit will of the Pope to break any undue union of faith and his mission with colonial interests, with Eurocentric nationalist ideologies, very strong at that time".
For the Prefect of the Congregation for the Evangelization of Peoples, even Pope Francis, by celebrating the centenary of this Apostolic Letter, basically wants three things: "first, he invites us to renew the mission as a baptismal commitment of all the faithful without leaving or delegating to missionary institutes only this fundamental dimension of the faith of the whole People of God; secondly, the mission must become the paradigm of ordinary life and of every action of the Church, finally, all Christians in their dioceses, parishes, movements and ecclesial groups, are asked to put themselves in a permanent state of mission".
The Cardinal then underlined the fundamental importance of catechists in the life of the young Churches of mission territories, defining them "the key figure in the effort of evangelization, especially in rural environments and communities". "They are responsible for many missionary communities entrusted to them by the Parish priests and Bishops - he recalled - they carry out the Sunday liturgy of the Word very often with the distribution of the Eucharist, they are responsible for prayer and charity, they live with their family with their fellow Christians and non-Christians, members of the same village and civil community, preparing children and adults for the sacraments". When the catechists are "seriously committed and well valued and well formed, they are true animators and formators of the entire Christian community together with the Bishops, presbyters and permanent deacons".
In the context of the social and ecclesial changes that also affect this ministry, "it is necessary to always discover new ways of being a catechist" said Cardinal Filoni, who indicated the opportunity to entrust catechesis not only to a man or to a woman who is particularly available and prepared, but also to teams composed of men, women, families, young people, a permanent deacon, a religious man or a religious woman and even children. However, it is necessary to form these small teams of four or five so that "they can bring a true witness of faith and of Church in the world".
To achieve this goal, local Churches must ensure adequate initial and ongoing formation of catechists, chosen after careful discernment, must take care of formative structures and choose prepared formators. "The local Bishops with presbyters and Religious - he recommended - must seriously take care of these important and fundamental collaborators in the work of the mission of the Church in the territories entrusted to them".
Cardinal Filoni then proposed a closer collaboration with the Bishops and the local Churches: "Respecting the different local needs and realities of each country, the National Directions of the particular Churches entrusted to CEP, in collaboration with the International Secretariat of the Pontifical Missionary Union, they could ordinarily interact with the formation process of the Catechists and thus regularly carry out our duty of missionary animation of the People of God. In this way their missionary formation service would reach the ordinary pastoral care of their Churches, would not develop in parallel, but would interact with the local needs of ecclesial formation for the mission. Catechists would receive adequate missionary formation in their preparation".
The last theme touched by the Cardinal in his speech concerned the need to "rethink the methods of prayer, mission animation and fundraising for the Pope's missio ad gentes together with the Particular Churches", in the context of "an authentic and radical reform of the PMS in the spirit indicated to us by the Holy Father in Evangelii Gaudium". In this regard he proposed to develop new forms of the presence of the PMS both at Marian shrines and other places dear to popular devotion as well as in the world of social media that are at the service of prayer and faith formation. He then asked the International Secretariats of the four PMS to "begin a unitary process of discernment on their own methods for a central fundrasing commitment": "The worrying decrease in funds, which the PMS receive and can distribute, therefore requires a new look on fundraising", he concluded. (SL) (Agenzia Fides, 28/5/2019)

ASIA/BANGLADESH - The Bible at the center of the Church's mission