AMERICA/MEXICO - Bishop Castro: violence in the State of Morelos undermines the future of young people 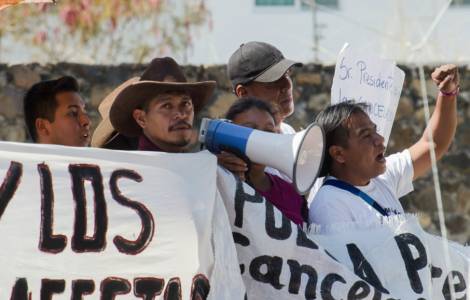 2020-07-18
The Bishops in the face of the current situation: "We are committed to life and human dignity"

2020-07-04
"We cannot get used to crime and violence and be indifferent to death": the diocese in the face of the massacre of Irapuato

Mexico City (Agenzia Fides) - In the ranking of 2019, among the 10 most violent cities in the world, Acapulco and Tijuana are at the top of the list. In that of the 50 most violent cities Ciudad Victoria, Tamaulipas, Ciudad Juarez, Chihuahua, Irapuato, Guanajuato are added.
In an interview with Agenzia Fides, Mgr. Ramón Castro Castro, Bishop of the Mexican diocese of Cuernavaca, speaks of the violence present in the State of Morelos: "In the statistics of high-impact crimes for every one hundred thousand inhabitants, our small State is one of the main and has always been among the top ten for abductions, crimes and for production and drug dealing".
Bishop Castro states that among the elements that characterize violence within the State there is impunity and corruption. "Criminal gangs have divided the territory by obliging almost 75% of the businesses and companies in Morelos to pay flat-rate taxes. Furthermore, corruption in the last six years of government has allowed criminal gangs to operate freely".
"Among these gangs, the "Colombians"- continues the Bishop - are a group that settled from the eastern state of Morelos carrying out money laundering. They lend money to the poor and needy with high interest rates and when people do not pay their debts, they are beaten or killed".
"In microcrime projects, the recruitment of young people looking for work is also included. Most often the unemployed are involved.
The Church tries to put itself at the service of the victims and the families of the victims through the Pastoral Care of the Consolation and Listening Centers, where they are assisted and followed by specialized professionals who help them to face their sufferings and tragedies", says Castro .
"Organized crime - he continues - is becoming a real cancer throughout the State, explains the Bishop. Two weeks ago, in the main square of the city, known as Zócalo, two businessmen were murdered among the people, in the light of day, and two other people were injured. Three people were killed outside our Seminary, two hairdressers were killed in Paloma de la Paz, nearby. Most of these murders occurred due to non-payment".
"With regard to pastoral activities, even this year we organized the march for peace; every day at noon we pray the Angelus invoking peace in the hearts of families, work and real peace building in the State of Morelos and the whole Church. The next march will be on Saturday 1 June".
The State of Morelos is one of the most affected by the earthquake of 19 September 2017. Of the 320 damaged places of worship, 189 have been rebuilt, about 50%. Bishop Castro exhorts the whole Church "not to remain indifferent to the situations of sorrow of the brothers, since all Catholics are one body. Let us entrust ourselves to prayer to achieve the peace and justice we need" (PM/AP) (Agenzia Fides, 23/5/2019)