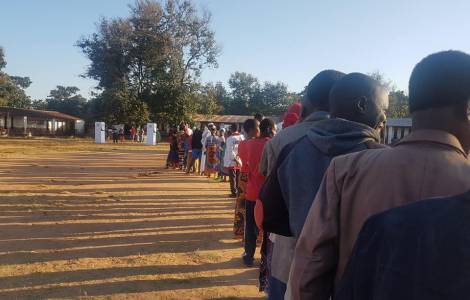 2020-10-12
A church desecrated, it is the third in two months; "The government must do everything to protect us"

2020-09-21
Religious leaders united in defending the sacredness of life: no to abortion

2020-09-11
"Excellent results with online teaching; now the challenge is to reopen face-to-face courses", says the Vice-Chancellor of the Catholic University

Lilongwe (Agenzia Fides) - "It is an important appointment", says Fr. Piergiorgio Gamba, Montfortian, a missionary in Malawi since the seventies, where today, May 21st, we vote. Voters are called to choose the President and representatives in Parliament and in local assemblies. "We hope there is a turning point that leads to a radical change. Although, to be honest, I do not think there will be a change in power. The opposition is fragmented and outgoing president Peter Mutharika is running again and will probably be re-elected", explains the missionary.
Malawi is one of the poorest countries in the world. Life expectancy is just over 55 years, more than half of the population lives below the poverty line (two euros a day). The workforce is almost entirely used in agriculture. "Poverty is extreme - continues Fr. Gamba -. There are no opportunities here and young people flee to South Africa. But even there they have no peace. They are often beaten and expelled. They are treated very badly. Most Malawians live on agriculture. But the fields are cultivated with old-fashioned methods. There is no industry. On the other hand, it is difficult for a company to develop in a country where electricity is lacking for several hours a day".
The President has promised that, if he is re-elected, he will rebuild the economy. He will encourage the creation of craft and industrial companies. "I can assure you - the head of State said - that we will reach the level of Singapore and Malaysia". "I fear that if he is confirmed - continues Fr. Gamba - nothing will change at all. Malawi will remain a very poor country with a non-existent production system, a school that fails to train people and no improvement in the field of healthcare".
What worries Father Gamba the most, however, is that an authentic democratic renewal will not come out of these elections. "In Malawi - he continues - formally there is democracy. In fact, democratic structures are not used for the common good, but to perpetuate a system that makes abuse and corruption its founding pillars. Corruption that goes from the high levels of politics to the humblest official. We need a profound change in mentality".
However, the opposition does not seem to be able to counter this system. The two leaders: pastor Lazarus Chakwera, at the head of the main minority party, and the Catholic, Saulos Chilima, Vice President, promised radical reforms, but were unable to join forces to defeat the President.
Faced with this situation, what is the position of the Catholic Church? The Bishops did not take sides for any candidate. On April 29 they published a pastoral letter in which they asked for a change. "We cannot expect leaders who stifle internal democracy and promote the culture of fear in their own party - they wrote - suddenly become democratic personalities once they reach government. [...]. Politics must promote the well-being of everyone and not just those who are tied to the powerful on duty. Health, education, agriculture, infrastructure are the sectors where we must aim to improve the living conditions of the citizens of Malawi, but who are threatened by rampant corruption". In the past Sundays, the letter was discussed in all the parishes.
"Will people vote for change? - asks Father Gamba -. I do not know. People often fear change and end up accepting, although reluctantly, what they know, even if it is not the best". (EC) (Agenzia Fides, 21/5/2019)

AMERICA/NICARAGUA - "Politics is not the simple art of managing power, resources or crises", warns Bishop Álvarez, in the face of the increase in violence