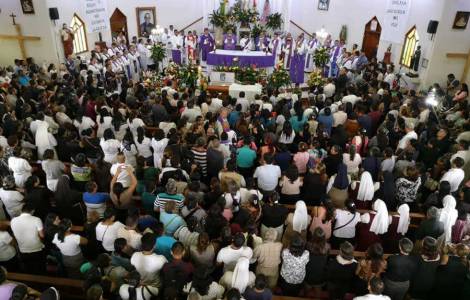 Sonsonate (Agenzia Fides) - Hundreds of faithful filled the church of the parish of San José in La Majada (about 70 km from the capital), to pay their last respects to their parish priest, Father Cecilio Pérez Cruz, murdered in the evening between Friday 17 and Saturday 18 May, whose funeral will be held today. He was 35 years old and a priest for 10. He was a simple, cheerful and dynamic person, loved in particular by the young people to whom he dedicated much energy: in the parish he had given life to a group of young people.
Father Cecilio, a diocesan priest, was a native of Sabana San Juan Arriba, municipality of Nahuizalco, in the same department of Sonsonate, about 15 kilometers from San José parish in La Majada, where he arrived four years ago and where he was killed. 150 meters separate San José La Majada police station and the parish church of Father Cecilio. According to the note sent to Fides, the inhabitants of the area are shocked because, although it is the first murder recorded in 2019, they have the feeling that when criminals want to kill someone they do not care whether there are policemen in the area.
A first police report reports that a piece of paper was found near the killed priest saying "For not having paid the bribe" signed by Mara Salvatrucha (MS-13), but there are strong doubts that this is a red herring.
Mgr. Constantino Barrera, Bishop of the diocese of Sonsonate, celebrated a memorial mass yesterday in front of hundreds of faithful and dozens of priests from many nearby areas.
Yesterday afternoon, Cardinal Gregorio Rosa Chávez, Auxiliary of San Salvador, declared that even priests are victims of extortion by the gangs: "There are cases we know, others maybe not, nobody is exempt... it is something that seems to have no solution, but we have to face this drama".
On Holy Thursday in 2018, Father Walter Osmin Vásquez, a 36-year-old priest from the diocese of Santiago de Maria, parish vicar of Usulután, was killed by the underworld in this area of the country (see Fides, 4/4/2018). From 1974 to 1977 Mgr. Romero had been Bishop in Santiago de Maria, the diocese of Father Walter Osmin Vásquez, one of the poorest dioceses, in the mountainous area of the country. (CE) (Agenzia Fides, 20/05/2019)