EUROPE/ITALY - Brothers of the Christian Schools: five "projects without border" for the mission of education 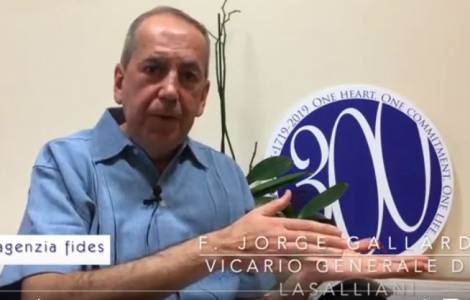 Rome (Agenzia Fides) - In the year of the celebrations to commemorate the 300th anniversary of the death of their founder St. John Baptist de La Salle, the Brothers of the Christian Schools present five new school projects for those living in "border places", geographical and cultural, in the sign of the mission of proximity to the poorest and marginalized: "We have a million students all over the world, of all religions, all ethnic groups, all cultures", says to Agenzia Fides Brother Jorge Gallardo, Vicar General of the Institute. "30% of our students attend our universities, which are about 100 worldwide. We are called to be close to the poorest, to those who are in a situation of distress, as Pope Francis asked us".
Brother Jorge tells Agenzia Fides the choice to start five projects, also in cooperation with other religious congregations, one in each continent: one in Asia, on the border between Myanmar and Thailand, where a school has been opened for refugee children or in search of a job; one in Africa where in South Sudan, in Rumbek, a school for boys was opened together with the Sisters of Loreto; another is an educational center for all migrants of the "triple border" between Peru, Colombia and Brazil, in Tabatinga, in the Amazon; a fourth is located in Europe, in Brussels, in the difficult neighborhood of Molembeek, where an educational center for migrants is about to open, in collaboration with the local parish. The fifth project, about to be completed – he continues – is in North America: the intention is to open a school for children along the border between Mexico and the United States". The objective - explains the vicar - is "to continue to ensure a human and Christian education in the sign of the tradition of our founder. We wish to express our faith through concrete actions in favor of the most needy and at the service of young people".
"A heart, a commitment, a life" is the central theme that inspires the celebrations of the Lasallian Jubilee Year, for the approximately 3,700 brothers of the Christian schools - almost 90,000 educators and lay collaborators, over a thousand educational centers in 80 countries in the world - united by the rule and charisma of the founder Saint John Baptist de La Salle, French priest and educator who died in Rouen on April 7th 1719. "Our educational proposal is having a positive response in every country - he concludes - involving many volunteers. This encourages us to continue our mission after 300 years". (ES) (Agenzia Fides, 18/5/2019)

AFRICA/GHANA - Jesuits in Africa: starting afresh from young people to give a prosperous future to the continent