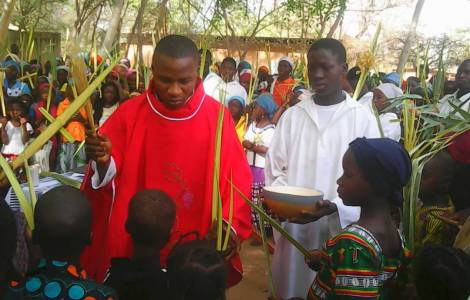 2020-06-19
Comboni Missionaries: let us contemplate the Heart of Jesus by opening our hearts to the mystery of his love

Madignano (Agenzia Fides) - "Every day, in the diocese of Niamey, at the end of each Mass, we pray for the release of Father Gigi Maccalli. Archbishop Laurent Lompo composed a prayer for him that we have been reciting since last September, since his abduction". This is what Father Vito Girotto, a confrere of Fr. Gigi, on a mission in Makalondi, 25 km from Bomoanga where Fr Pierluigi was kidnapped 8 months ago, 18 September 2018, told Agenzia Fides.
The prayer will be read to the assembly this evening, May 17, during the vigil to be held in Madignano (Cremona), Fr. Maccalli’s birthplace. Fr. Girotto translates the text of the prayer to Fides: "God our Father, you call us to freedom, your Son Jesus submitted to suffering to take away the sin of the world, grant your servant Pierluigi, imprisoned, the freedom that you wanted to give to all your children. Give our time the grace of peace, we ask it for Jesus Christ our Savior and our Lord. Our Lady of Perpetual Help, Help Us. Saint Michael the Archangel, protect us".
Fr. Vito adds: "We in Niger believe that Fr. Gigi is alive but we do not know where he is. We think, however, that he is not in Niger but in another country in Sahel. Knowing Gigi, because I collaborated with him in Italy and in Niger, I can think that, with his serenity and his ability to see people and events according to God's plan, he will be able, supported by our prayer, to speak with who keeps an eye on him and will show his will to dialogue and to understand why they reached that gesture that took him away from his beloved mission in Bomoanga".
The missionary recalls: "Eight months have gone by since that evening on Monday 17th September, when I received a phone call, at about 10:00 pm, from Fr. Dass Arokya who told me that bandits had fired in the air and entered Fr. Pierluigi Maccalli’s house probably to rob him. Ten minutes later he told me that they had forced him to follow him on a big motorbike where there was room for three people: two assailants with our father in the middle. Since that evening I too had to leave Makalondi because, according to the police, there was no more security for Europeans in the area. I arrived in Niamey that night and had to adapt to the new situation. Thinking about the living conditions of Fr. Gigi, as we affectionately call him, I tried, together with the other confreres, to keep the memory alive in prayer: we think and hope that he is still alive".
Father Girotto continues: "We add a special prayer every month to the prayer composed by our Archbishop Laurent. In March, two Protestant Pastors and two youths from Bomoanga recalled Fr. Pierluigi who helped everyone, without distinction, especially malnourished and sick children; in May an ecumenical prayer with Muslims should be held, which I do not know if it will be possible to carry out, given the climate of great insecurity, which has increased since the beginning of Ramadan. This assiduous and choral prayer between Christians and other believers reminds us that there are dozens of other people kidnapped on the border with Nigeria. They are women, children, and men of Muslim religion whose names we do not know but who suffer from lack of freedom. We know that the weakest among them are reduced to slavery. With all the signs of violence and death coming from neighboring Burkina Faso and the latest terrorist attacks in Niger, the climate of fear has increased but the hope of freedom for all the hostages in Sahel has not diminished".
"The prayer that the Church of the first Christians did for the liberation of Peter - concludes the priest and missionary of SMA - is for all those people who are deprived of freedom. In the long night of the Peter’s detention, the strength of the Church's incessant prayer rises to God and the Lord hears and performs an unthinkable and unexpected liberation, by sending his angel. Today we address this plea to the Lord again, to save Father Pierluigi". (VG/AP) (Agenzia Fides, 17/5/2019) 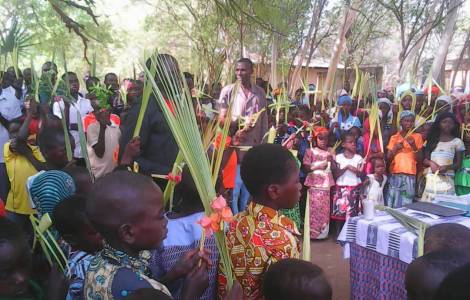 ASIA/SINGAPORE - Covid-19, Phase 2: registration of the faithful online to participate in Masses

AMERICA/URUGUAY - Vocational Month: towards a new time of evangelization

AFRICA/NIGER - A missionary: "I am leaving Niger, but not Father Maccalli: the mission continues with the mark of the cross"