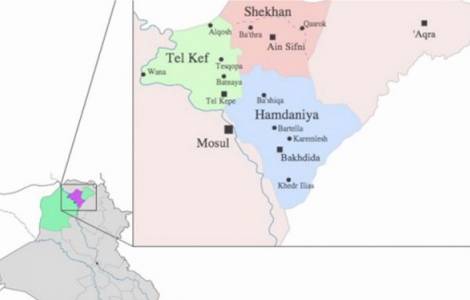 2020-06-18
ASIA/IRAQ: Chaldean patriarch to Christian politicians: it is a difficult time for us, let's meet to face our fears and our future together

2020-06-12
New Prime Minister al Kadhimi visits Mosul and the Nineveh Plain: "Christians, one of the most authentic members of the Country"

Bartella (Agenzia Fides) - The robbery and violence that two elderly Christian women suffered at home in the Nineveh Plain by an armed group have become political "cases", causing the controversy over the lack of security in that area of Iraq.
The two women - mother and daughter - were beaten up on Monday 13 May in their home, in the town of Bartella, by armed men, who after having raided their home massacred them and robbed them of their property. The two women are in hospital, in serious condition. Meanwhile, the day after the violent robbery, the police arrested two suspects, who had a real arsenal in the house: three Kalashnikovs, four grenades and seven military knives.
The story is not reported in the local media as a simple crime story. Exponents of Christian organizations such as Professor Muna Yaku, professor of law at the University of Salahaddin in Erbil, link the beating of the two women to other intimidating actions aimed at removing or keeping Christian families away from their villages of origin, located in the Nineveh Plain, where Christians fled from between the spring and summer of 2014, when the entire area had fallen under the control of the Islamic State (Daesh) militias. Strong requests to investigate the criminal case and to identify and punish the perpetrators have also come from Rayan al Kildani, at the head of the "Babylonian Brigades" - a political group born as an armed militia, which has always claimed its own militia label composed of Christians, even if their connection with pro-Iranian Shiite militias is documented.
The Nineveh Plain was in the past an area of ethnic and religious coexistence, where Sunni Arabs, Christians, Kurds, Shabaks and Yazidis lived together. Many of the minority groups in the area were forced to flee when Daesh took control of Mosul.
In Bartella, despite appeals from ecclesiastical hierarchies and initiatives of solidarity and economic support, less than a third of the 3,800 Christian families who fled at the time of the jihadist occupation have returned to their homes.
The Nineveh Plain continues to be at the center of regional interests and operations of different ethnic-religious groups, with exponents of Christian communities who launch periodic alarms denouncing attempts to alter the traditional demographic balance of the area. In the past (see Fides, 2/2/2018), Khalil Jamal Alber, director general for Christian affairs at the Ministry for religious endowments (Awqaf) of the government of the autonomous region of Iraqi Kurdistan, had argued that the popular mobilization forces - Shia militias present in the territory of the Nineveh Plain - were putting in place a real attempt to modify the multi-religious and multi-ethnic composition of the population of the Plain, to the detriment of the Christian component. This program, according to Khalil Jamal Alber, was carried out through the transfer in the region of Shiite population also coming from southern Iraq, and with forms of intimidation and social pressure implemented also by members of the Shabak religious ethnic group. (GV) (Agenzia Fides, 15/5/2019)

ASIA/MIDDLE EAST - Churches and ecumenical bodies in the Middle East: the "reconversion" of Ayasofya is a sabotage of the new paths of brotherhood between Christians and Muslims

ASIA/MIDDLE EAST - Churches and ecumenical bodies in the Middle East: the "reconversion" of Ayasofya is a sabotage of the new paths of brotherhood between Christians and Muslims

AFRICA/MOZAMBIQUE - Wave of IDPs in the northern province, caused by violence and destruction