EUROPE/SPAIN - Academic Day at San Damaso University: the announcement of the Extraordinary Missionary Month concerns everyone 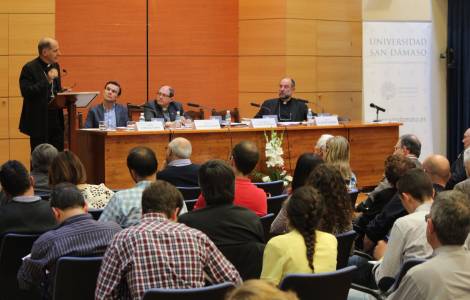 Madrid (Agenzia Fides) - An academic Day dedicated to the Extraordinary Missionary Month of October 2019 was held yesterday at the San Damaso University of Madrid, organized by the Chair of Missionology, the Faculty of Theology and the Instituto Superior de Ciencias Religiosas (ISCCRR). The theme chosen - "The Church is born from mission and lives for the mission" - was introduced by prof. Agustin Gimenez Gonzalez, director of ISCCRR, and by prof. Juan Carlos Carvajal Blanco, Coordinator of the Chair of Missiology. Therefore the National Director of the Pontifical Mission Societies (PMS) in Spain, Fr. José Maria Calderon Castro, presented the Extraordinary Missionary Month announced by Pope Francis, illustrating the reasons and perspectives.
Archbishop Giampietro Dal Toso, President of the PMS, gave a speech on the theme of the day. Addressing those present, all diocesan collaborators of the PMS, priests, men and women religious and mostly lay people, thanked them for their commitment in supporting, often in anonymity, the activities of the PMS in the Spanish dioceses, and urged them to continue especially in these months that prepare us for the Extraordinary Missionary Month.
Since the PMS are over one hundred years old but at the same time little known, Archbishop Dal Toso described the four Societies and their specific tasks, taking inspiration from the Statute that governs its operation, indicating history, theology and charisma. "Today 117 National Directions ensure the presence of PMS in 140 countries - he recalled -, which supposes a truly universal diffusion, both in very large countries like Canada and Brazil and in the smaller ones, located at the geographical margins of the world, such as those of the Pacific Ocean or the Caribbean countries. In the midst of so many vicissitudes through which the Societies have historically passed, we can affirm that they are an extraordinary fruit of grace".
The common charismatic nucleus of the four PMS can be identified in the mission, to which all the baptized are called and which still "urges, both for the mandate of Jesus before ascending to heaven, and for the realization that only the Gospel is the authentic answer to the needs of every man". Together with mission, prayer and charity are at the center of the life of the PMS.
The Archbishop therefore praised the commitment of the National Direction of Spain, with numerous initiatives in the dioceses, recalling with gratitude Fr. Anastasio Gil, former National Director, who from the first moments actively collaborated with the PMS International Secretariats for the organization of the Extraordinary Missionary Month.
Mgr. Dal Toso then spoke extensively in the second part of his speech, on the Extraordinary Missionary Month, also citing some initiatives that are being prepared globally, then he concluded: "Baptized and sent is the reality in which God has placed us and that we are called to communicate. The announcement of the extraordinary month concerns everyone, national Churches and dioceses, religious communities, lay associations and every single believer. The call to responsibility is personal, and no believer is so poor or lacking in resources that he cannot give something, with the certainty that the Lord, who asks us to give everything, will be able to make him bear fruit according to his will".
The great missionary commitment of the PMS of Spain, which takes the form of a series of activities and events of all kinds, involved over 250,000 people in the 69 Iberian dioceses in 2017, according to information sent to Fides from the National Direction. The large participation of children in missionary activities is very well known: 60,508 children took part during the Christmas period in the initiative "Sembradores de Estrellas" and more than 6,148 at the Missionary Childhood Competition. Great importance is given to formation, in the conviction that the missionary activity of the Church is not improvised. In 2017, 1,890 people attended the missionary formation meetings proposed by the PMS. The collaboration with academic institutions such as the San Dámaso University or the Faculty of Theology of Northern Spain are also worthy of attention. The enormous and silent work of missionary animation that takes place throughout the year in the Spanish dioceses to keep the missionary spirit alive cannot be overlooked. (SL) (Agenzia Fides, 15/5/2019)