AMERICA/HAITI - Gangs kill and terrorize, even blackmail those who carry out humanitarian projects 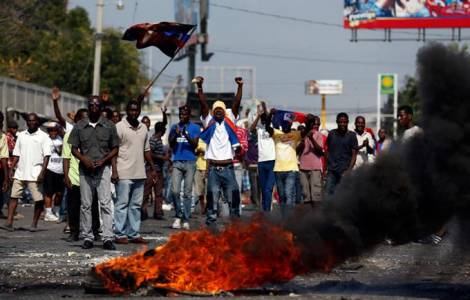 2020-07-07
Bishops on new decrees: "they threaten the foundations of our society, coexistence, culture, faith and Christian morality"

2020-06-18
Despite the pandemic, Haitians celebrate Our Lady of Perpetual Help, invoking her to get out of the crisis

2020-04-30
Covid 19, a Redemptorist: "Many believe that the disease does not exist in the country and the diaspora no longer sends money"

Port au Prince (Agenzia Fides) - Human rights organizations and religious institutions continue to be concerned about the increase in insecurity throughout the country in Haiti, according to a report sent to Fides by local sources. Since November 2018, more than 100 civilians have been murdered by gang violence, while the police report 15 members killed in 2019. Perhaps for the first time in the history of violence, gangs begin to blackmail even NGOs and Embassies, asking money in exchange for "protection" in order to complete some humanitarian project in the country.
Together with human rights organizations that denounced the bloodbath perpetrated on the evening of April 24 by bandits belonging to a gang that uses the name of Sony John, aka Tije, in Carrefour Feuilles (south-eastern district of the capital Port-au-Prince ), also the Catholic Church and the Protestant Federation have raised their voices. Eight people, including a pregnant woman, were killed and a dozen others were injured, according to the police report.
The Metropolitan Archbishop of Port-au-Prince, Mgr. Max Leroy Mésidor, in a meeting with the local press said that "the uncertain future of society is struggling between poverty, insecurity and impunity". "The current violence is not spontaneous, it is organized," said the Archbishop in his message of condolences to the families of the victims of the April 24 massacre.
The Protestant Federation of Haiti (Fph) has condemned "this vile and barbaric act" committed against peaceful citizens by bandits without faith or law. "No senior government official should feel proud of his position until justice has been done", says Fph, expressing dismay at the alarming deterioration in the living conditions of citizens in Haiti.
The Haitian Observatory for Human Rights (Ohdh) denounces the passivity of political and police authorities, who are unable to stop the notorious bandits that have been terrorizing the population for several months. These, according to the criticisms of the local press, have the support of parliamentarians, senior officers of the Haiti (Pnh) national police and members of the government, as reported by the OHDH. Proof of this is the fact that Senator Garcia Delva was expelled from his political party, Ayiti, as his agreements with the leader of the gang, Arnel Joseph, were discovered.
Fides received dramatic testimonies from the missionaries who work on the spot: "those who suffer are the poorest, because it seems that the same government sells arms to bandits in poor neighborhoods to sow fear and remain in power. Every politician has his own group of bandits, it is real chaos!".
The situation continues to prevent not only the development of the country but also the distribution of fundamental aid to feed the most defenseless like children. Only some sectors of the Catholic Church and some NGOs manage to bring food to the little ones (see Fides 13/03/2019). (CE) (Agenzia Fides, 7/5/2019)

AMERICA/COLOMBIA - A call to social friendship from the Archbishop of Bogotà: "We cannot remain indifferent"