AFRICA/CENTRAL AFRICA - "The Mission gave the pygmies in addition to the Gospel, also freedom and dignity, preserving their culture and traditions" 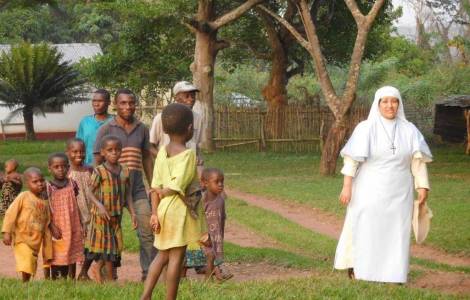 2020-02-27
Appointment of the National Director of the PMS, Fr. Innocent Blaise Ndongbo

2019-09-07
Carmelites: "Education and development are our mission in the young heart of Africa"

2019-07-04
Agreement for the repatriation of more than 295,000 Central African refugees from Cameroon

Bangui (Agenzia Fides) - "Belemboké, 500 km south-west from Bangui, is a mission of only pygmies", writes to Agenzia Fides Fr. Federico Trinchero, a Carmelite missionary stationed in the capital of the Central African Republic, Bangui, who visited the southern part of the Country.
"The only non-pygmies in the village are two African priests - Fr. Anselme and Fr. Sèrge -, three sisters from Latin America - Sr. Melania, Sr. Alba Maria, Sr. Margarita - and primary school teacher", says Fr. Federico.
"The pygmies - my confreres explain - are the real inhabitants of Central Africa. Here, indeed, the good Lord put them there, while the other inhabitants of the country belong to the Bantu ethnic group, who arrived in Central Africa following migrations. The parish and village in Belemboké were born together in 1973, on the initiative of Fr. Lambert, a brave French priest. This missionary noticed that the pygmies very often were employed by masters of other ethnic groups, almost like servants. The priest allowed the birth of a village of only pygmies who built around their church their typical small huts of branches and leaves intertwined in the form of an igloo. And, with all due respect to those who believe, a little hastily, that evangelization was one of the causes of the extinction of indigenous cultures, this priest also gave the pygmies freedom and dignity, preserving their culture and traditions. And among the most interesting elements of the pygmy culture, in a context where polygamy was widespread, he found the practice of a rigorous monogamy – and it is appropriate to say - with the Christian conception of marriage. Obviously the initiative of Father Lambert did not please those who had lost free labor. The priest was threatened. But, Bokassa, the famous ruler of what at the time was the Central African Empire interviened in his defense, who declared that anyone who had harmed that priest was causing harm to the emperor himself. Since then, these small forest masters continue to live happily and in peace, despite not knowing anything about the umpteenth and ambiguous peace agreement for Central Africa that has just been signed in Khartoum", concludes Fr. Federico. (L.M.) (Agenzia Fides, 3/5/2019)

AMERICA/PERU - Bishops: offer sympathy towards those who do not work, in order to face this hard moment as a family