EUROPE/ITALY - "For the sake of my people I will not keep silent": Day in memory of the martyr missionaries 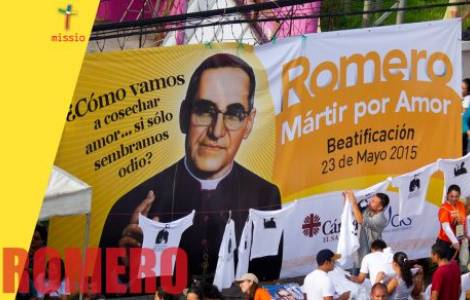 2021-04-28
Scalabrinians: humanitarian shame in the Mediterranean demands a response from the States

2021-04-27
The General Council of Comboni Missionaries: let us pray for many people who in South Sudan suffer from insecurity and violence

2021-03-10
Human trafficking: "The pandemic must not lead us to turn a blind eye to other problems"

Rome (Agenzia Fides) - The biblical verse "For the sake of my people I will not keep silent" (see Is 62,1), chosen as the theme of the 27th Day of prayer and fasting in memory of the missionary martyrs that is celebrated annually on the 24th March, is inspired by the testimony of Archbishop Oscar Arnulfo Romero, Archbishop of San Salvador. The date of March 24 was chosen as the day of the Archbishop's assassination, which took place in 1980, while he was celebratingMass, beatified on May 23, 2015 and canonized by Pope Francis on October 14, 2018.
"To love God means to love one's brothers, to defend their rights, to take on their fears and difficulties - is what is written in the brochure prepared by Missio Italia for the animation of the Day -. For the sake of my people, I will not be silent means to act coherently with one's faith. As Christians, missionary disciples, bearers of the Good News of Jesus, we cannot remain silent in the face of evil. To do so would mean betraying the mandate entrusted to us".
Founded in 1993 by the initiative of the then Youth Missionary Movement of the Pontifical Italian Mission Societies, with the intention of remembering all the witnesses of the Gospel killed in various parts of the world, the initiative has spread to many nations, even on different dates and circumstances: many dioceses, religious institutes, ecclesial movements dedicate special initiatives to remember their missionaries and all those who shed their blood for Jesus Christ and his Gospel. Pope Francis continually recalls that "today there are more martyrs compared to the first centuries".
During the year 2018, according to the report annually edited by Agenzia Fides, 40 missionaries were killed in the world, almost double compared to the 23 of the previous year, mainly priests: 35. After eight consecutive years in which the highest number of missionaries killed had been recorded in America, in 2018 Africa was the first country in this tragic ranking.
"The violence that is unleashed and continues to rage in the geographical and existential suburbs of our time is not limited to the bloody facts, which are already very serious, and often concern our missionaries", writes Father Giulio Albanese, Comboni missionary and director of the Missio magazines, in the thematic reflection on the Day. "Their killing, in fact, is becoming more and more painful for its spreead, motivations and the consequences of the phenomena that generate death and destruction, from Africa, to Latin America, from the Middle to the Far East. Just think of the forced recruitment of child soldiers or baby kamikaze, young people attracted to the coils of deception; so many families thrown into despair; many productive activities stifled by extortion; so many lives cut short; and a widespread resignation among the populations, almost as if it were an inevitable disaster! As baptized, having received the mandate to announce the liberating Gospel of Christ, we cannot remain silent in the face of so much evil, and as the prophet says: For the sake of my people, I will not keep silent. "
The brochure created by Missio Italia presents various suggestions for animation: a brief reflection for every Sunday, from Lent to Pentecost; proposals for the Via crucis, for a Eucharistic Adoration, for the prayer Vigil, for a community penitential liturgy. Five films will also be shown on the subject and offers some proposals to create "street animation". The gesture of solidarity that traditionally accompanies the celebration of the Day this year concerns a project for the youth of the Sainte Marie parish of Mwenga, in the diocese of Uvira, the Democratic Republic of Congo. On the occasion of the Day, Missio also proposes an awareness campaign through social networks, in particular Facebook and Instagram. (SL) (Agenzia Fides, 22/3/2019)

ASIA/VIETNAM - Young Catholic gives his life to save three students: a martyr for the nation

VATICAN - Catechists witnesses of faith up to the gift of life