ASIA - Joint appeal of the Directors of the PMS of India and Pakistan: "Dialogue is urgently needed for the common good of our peoples" 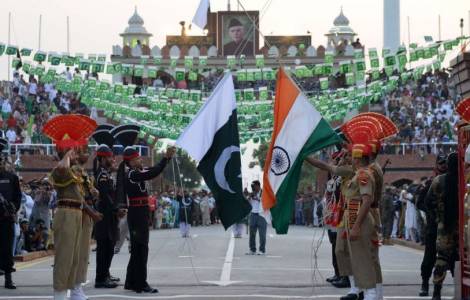 2019-09-07
Franciscans among the nomads: the mission of the Church in Central Asia

2019-08-20
Catholic journalists in Asia: together to announce the Gospel values

Vatican City (Agenzia Fides) - "The rulers of India and Pakistan must sit down at a negotiating table and start dialogue sessions to address and resolve the long-standing issue of Kashmir. We are aware that it is an ancient issue and a delicate political knot, but we need to roll up our sleeves and commit ourselves to the common good of our two peoples. Dialogue starts from mutual trust. Let us build friendship, respect and abandon all hostility between our peoples". This is the joint appeal, which through Agenzia Fides, the National Directors of the Pontifical Mission Societies (PMS) of India and Pakistan, Fr. Ambrose Pitchaimuthu (India) and Fr. Asif John (Pakistan) launch, expressing the hope to overcome the crisis between the two states. In an interview with Fides, the two priests together state: "We are brothers and we feel brothers, after this last crisis, we need to act and start a path of peaceful confrontation. As Christians of India and Pakistan we have this heartfelt request in our hearts and minds for our rulers. And, as believers, sons of one heavenly Father, we are ready to show fraternity that goes beyond the political boundary", they say, while the Indian army has warned the Pakistani counterpart that further provocations and bombings near the "Line of control " in the Indian state of Jammu and Kashmir could imply "serious consequences".
Fr. Asif John, who in Pakistan is also Vicar General in the diocese of Islmabad-Rawalpindi, tells Fides: "Peace is the only path. The common people, in Pakistan as in India, have no problem. There is need to increase cultural exchanges. As Christian Churches we had common initiatives in the past that we can revive today, setting an example as a united Church. Sometimes nationalism is an obstacle to establishing good relations with India but, in the collective conscience in Pakistan, there is a reference to common values and also to the urgency of fighting a common enemy: terrorism".
Fr. Ambrose Pitchaimuthu, priest of the Indian state of Karnataka agrees: "First of all it must be said clearly that a war would be meaningless. Instead, we are called to overcome boundaries and build unity. As Churches in the two countries, we hope for the formation of a common platform, perhaps under the aegis of the Federation of Asian Bishop’s Conference (FABC). The peoples of India and Pakistan have a common culture and roots and the common people do not harbor feelings of hostility: there is a desire for peaceful coexistence and our rulers must respect and voice this will. We ask ourselves: why, after so many years, there is not yet a definitive solution for Kashmir? Perhaps because the political leaders, over the decades, have taken advantage of the crisis for reasons of internal political consensus: it is a risk that is still happening today. Today we ask political leaders to focus on the good and the prosperity of our peoples". (PA) (Agenzia Fides, 8/3/2019)

ASIA/SRI LANKA - "Emotional literacy" for students, to overcome the wounds of the war