AFRICA/ETHIOPIA - In the name of the Trinity, a bond of communion between the Church of Adaba and the Diocese of Anagni-Alatri 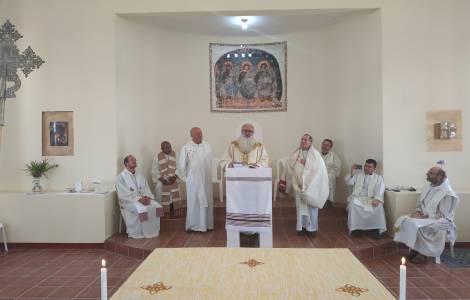 2020-09-29
Appointment of the Apostolic Vicar of Gambella

2020-09-10
The odyssey of Eritrean refugees, forced to starve, rejected, victims of traffickers

2020-07-24
Card. Souraphiel: "Dialogue, solidarity, international relations: the Church works for the good of the nation"

Adaba (Agenzia Fides) - The new church of the Pastoral Center of Adaba, in the Apostolic Prefecture of Robe, Ethiopia, has been named after the Most Holy Trinity. This is what Fr. Giuseppe Ghirelli, fidei donum missionary, responsible for the missionary office of the Apostolic Prefecture, told Agenzia Fides. "The traditional hymn that the pilgrims of the Diocese of Anagni-Alatri (in Italy) sing in the Sanctuary of the Trinity of Vallepietra was sang for the first time in the Church of Adaba in Ethiopia at the end of the celebration for the dedication to the Holy Trinity of the newly built church", he reports. "We came to this choice when in September, the Prefect of the Apostle of Robe, Father Angelo Antolini, Ofm, was with us on a visit to the Shrine of the Holy Trinity of Vallepietra", says Fr. Ghirelli.
"For centuries, in Vallepietra, pilgrims have venerated a fresco of the twelfth century portraying the three Divine Persons with the Book in their hands", explains the missionary. "In front of the Sacred Image, Fr. Angelo expressed to Msgr. Alberto Ponzi, Rector of the Sanctuary, the desire to dedicate the new church of the Pastoral Center of Adaba to the 'Holy Trinity' so as to strengthen the link between the two churches, the ancient one of Anagni-Alatri and the young one of Robe", continues Fr. Giuseppe.
"Together with other priests of the diocese of Anagni-Alatri, who came to Ethiopia for the celebration of the dedication - Fr. Giuseppe told Fides. On the morning of March 2, the faithful of the various communities of the Prefecture began to arrive and the celebration began with prayers made by the elderly of the Oromo ethnic group. After the initial rites, before the liturgy of the Word, there was the consecration of the ambo and before the offertory, the consecration of the altar. At the end, before the blessing, the letter of Mgr. Lorenzo Loppa, Bishop of Anagni-Alatri was read, who will remain in the Church of Adaba in memory of the bond of communion between the two churches. It was a simple but dignified celebration, in which everyone participated intensely". (GG/AP) (Agenzia Fides, 6/3/2019)