VATICAN - The Pontifical Mission Societies: "a worldwide network of prayer and charity at the service of the Pope" 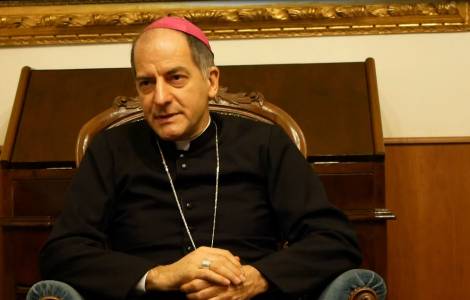 Vatican City (Agenzia Fides) - "How can we define the Pontifical Mission Societies in one sentence? They are a worldwide network at the service of the Holy Father to sustain the mission and the young Churches through prayer and charity. We should consider the Pontifical Mission Societies and their charismatic service for the Church's mission in light of the Church's mandate to be a sign and instrument of salvation for the world": this is what Archbishop Giovanni Pietro Dal Toso, President of the Pontifical Mission Societies (PMS) said during his speech at the formation and refresher Course for the National Directors of the PMS in English, gathered in these days at the International Missionary Animation Center (Ciam), in view of the extraordinary Missionary Month of October 2019.
Working in the Pontifical Mission Societies, the Archbishop specified, "let us keep in mind that we are talking about a charism. I expressly use the term “charism”, because our Mission Societies would not be comprehensible without the inspiration of the Holy Spirit. This is evident if we consider the historical context in which they were founded. Various saints lived in the Diocese of Lyon at that time: St. John Maria Vianney, St. Peter Julian Eymard, founder of the Congregation of the Blessed Sacrament, St. Peter Chanel, who later became apostle and martyr in Oceania. The missionary charism of the PMS was born in this context of holiness to sustain the mission through prayer and charity".
After a theological report on the Church's missionary spirit, the Archbishop, pointing out the specific charism of the PMS, recalled that "our foundress, the venerable Pauline Jaricot, gathered her friends to pray and take up collections for the missions. This charism, this gift of the Holy Spirit, is a concrete way to participate in the subjectivity of the Church in the fulfillment of the missionary mandate. The Church, precisely as a body made up of members, is a promoter of evangelization. The support we offer has a very important function: to help missionaries to not feel alone, but rather supported by the whole Church. In fact, just as no one can believe alone, no one can be a missionary alone. The whole Church is subject of evangelization, and therefore no missionary is alone, but supported by the rest of the Christian community, in whose name he carries out his mission".
"From a structural point of view - continued Dal Toso - the PMS are both universal and local. They are coordinated at the universal level by the four International Secretariats, under a single President, and entrusted to the Congregation for the Evangelization of Peoples. The local dimension manifests itself in the fact that we have about 120 National directions that in turn support the diocesan directors".
"The great task of the PMS - the President said - is that of raising missionary awareness. Indeed, in accordance with the teachings of the Popes and the Council, the mission is a task entrusted to the whole People of God. The PMS have the special mandate to keep this missionary spirit alive, and this is ultimately the goal intended for the celebration of the Extraordinary Missionary Month of October 2019". (Agenzia Fides, 5/3/2019)

ASIA/JAPAN - A missionary: "In times of a pandemic, we rediscover the centrality of the word of God"