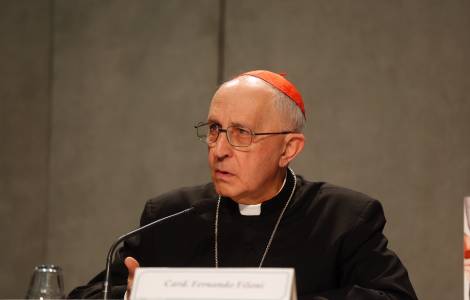 Vatican City (Agenzia Fides) - Cardinal Fernando Filoni, Prefect of the Congregation for the Evangelization of Peoples, followed the delicate and complex path of the Catholic Church in China since 1992, the year of its arrival in Hong Kong. In those same years the diplomatic detente began between the People's Republic of China and the Holy See, with the first contacts between members of the Secretariat of State and the Ministry of Foreign Affairs of Beijing. Agenzia Fides re-publishes the interview with the Osservatore Romano.

Your Eminence, for several years now you have led the Dicastery of the Holy See responsible for evangelization, with particular reference to the so-called “mission” territories. What do you see as the pastoral significance of the “Provisional Agreement on the Appointment of Bishops” signed by the Holy See and the Chinese Government on 22 September 2018?

Since the Dicastery that I oversee has a particular responsibility for accompanying the Church in China, I feel particularly called upon to speak about the pastoral significance of the Provisional Agreement. But I think Pope Francis said it best when, in his Message to the Catholics of China last September, he wrote: “the Provisional Agreement […] is the result of a lengthy and complex institutional dialogue between the Holy See and the Chinese authorities initiated by Saint John Paul II and continued by Pope Benedict XVI. Through this process, the Holy See has desired – and continues to desire – only to attain the Church’s specific spiritual and pastoral aims, namely, to support and advance the preaching of the Gospel, and to reestablish and preserve the full and visible unity of the Catholic community in China” (2). Furthermore, “The Provisional Agreement signed with the Chinese authorities, while limited to certain aspects of the Church’s life and necessarily capable of improvement, can contribute – for its part – to writing this new chapter of the Catholic Church in China. For the first time, the Agreement sets out stable elements of cooperation between the state authorities and the Apostolic See, in the hope of providing the Catholic community with good shepherds” (5). Ultimately, while sharing some of the concerns expressed by many parties because of the difficulties that still remain and of those that may arise on the journey, I feel that within the Catholic Church in China there is a great expectation of reconciliation, unity, and renewal for a more decisive revival of the work of evangelization. We cannot stay still in a world that, from many perspectives, is running at a supersonic pace, yet, at the same time, experiences the urgent need to rediscover the spiritual and human values that give firm hope to people’s lives and create a more cohesive society. In a word, this is what Christianity can offer to present-day China. I should add that in receiving much correspondence from Chinese clergy, as well meeting bishops, priests, religious women, and the laity, I have always observed their desire that the Church in China might return to a sense of “normality” within the Catholic Church (…)