TURKEY - Erdogan: needless to insist on reopening the theological school of Halki, if the problems of Muslims in Greece are not resolved 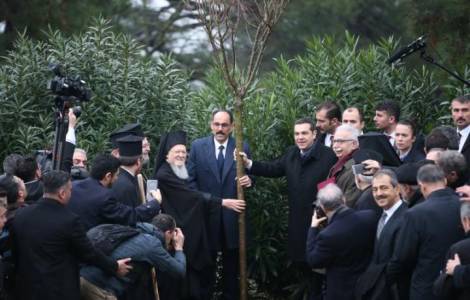 2020-07-15
Ayasofya, Erdogan’s Party responds to criticism: religious freedom has increased with our governments

2020-07-13
Churches and ecumenical bodies in the Middle East: the "reconversion" of Ayasofya is a sabotage of the new paths of brotherhood between Christians and Muslims

2020-07-01
Ecumenical Patriarch Bartholomew: the conversion of Hagia Sophia into a mosque will sow discord between Christians and Muslims

2020-06-30
Bishop Bizzeti's proposal: to dedicate a road in Iskenderun to Luigi Padovese

Ankara (Agenzia Fides) - A "Do ut des" that links the question of the theological school of Halki - an academic center connected to the Ecumenical Patriarchate of Constantinople, closed by the Turkish authorities in 1971 - to the solution of problems and legal disputes between the Greek institutions and community bodies of the Islamic minority residing in the Western Thrace. This is the card played by Turkish President Recep Tayyip Erdogan on the occasion of the visit to Turkey by the Greek Prime Minister Alexis Tsipras (who wished to meet Ecumenical Patriarch Bartholomew I on Wednesday 6 February at the headquarters of the former Orthodox Theological Institute, located on the island of Halki).
On receiving Tsipras in Ankara, Erdogan expressed regret for the closure of the theological school, but also denied any responsibility in this matter of the current Turkish leadership, noting that "it is not our fault, we were not the rulers at that time". Then, he added a personal memory, confiding that "when I went to school, the religion teacher sometimes took us there. There are so many books, there are about 38 thousand, can anyone read them all? I wondered….". Furthermore, Erdogan confirmed that the question of the possible and desirable reopening of the Halki Theological School is addressed to the Turkish authorities by all the Greek political leaders. "And whenever the question of the faculty of theology returns to the table - added the Turkish President -, when I am asked the question, I say: "Go to Western Thrace too, so that we can solve the mufti issue".
With this statement, Erdogan depicted an explicit connection between the Halki affair and the growing controversies between the Greek authorities and the Islamic minority of Western Thrace, especially regarding the selection criteria of the mufti and the overview of their prescriptive pronouncements - inspired by Sharia - in the context of the Greek legal system. In recent years, the Greek authorities, as indicated by the Parliament, have begun to appoint the mufti, while the Turkish minority, appealing to the Treaty of Lausanne, claims the right to autonomously elect Muslim juridical experts. The Islamic population in that region of Greece has about 150 thousand people, and the condition of this community represents one of the historical problems in the relations between Greece and Turkey. Last week, Ecumenical Patriarch of Constantinople Bartholomew I had expressed the hope that the meeting between Tispras and Erdogan in Ankara could help to unblock the stalemate and favor some steps forward towards the reopening of the Halki Theological Faculty. "The fact that the visit of the Greek Prime Minister to the Ecumenical Patriarch was held in Halki" the Patriarch said "is a special sign, because we all know how much we desire and we need the reopening of our Faculty of theology, after almost half a century, since its activity has been unjustly suspended". (GV) (Agenzia Fides, 07/2/2019)

ASIA/LEBANON - Patriarch Rai: "mysterious explosion" in Beirut. We ask everyone for help

ASIA/LEBANON - Patriarch Rai: "mysterious explosion" in Beirut. We ask everyone for help

ASIA/IRAQ - Chaldean Patriarchate: no decorated Christmas trees, no celebrations, out of respect for the victims