AMERICA/CHILE - In 70 years 2,300 missionary priests from Spain to Latin America 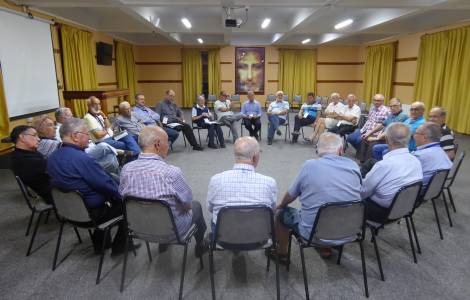 2020-06-05
Bishops: "we expect willingness and commitment from political authorities and social leaders in order to reach a social pact"

Santiago (Agenzia Fides) - The mission is a fundamental element in the life of the Church, an aspect that this year will be highlighted even more with the celebration of the Extraordinary Missionary Month, in October. Among the established missionary realities is the Hispanic Cooperation Society for Hispanic America (OCSHA), founded in Spain in 1949. In these 70 years it has sent more than 2,300 priests to Latin America, to collaborate in the consolidation of Christian communities. Of these, there are still more than 200 Spanish diocesan priests who carry out their missionary service in these lands of Latin America.
According to the news sent to Agenzia Fides, from January 28 to February 1, 35 of these priests, together with two Bishops, will meet in Santiago, Chile to continue to reflect together on the mission. Among those present there are many who were in Latin America for more than fifty years, and therefore offer an authentic witness of missionary life.
The new director of OCSHA, Fr. José María Calderón, who participated for the first time in these meetings, thanked those present for their missionary dedication, an aspect also underlined by Mgr. Cristián Roncaglio Pacheco and Mgr. Pedro Ossandón Buljevic, Bishop auxiliaries of the Archdiocese of Santiago, who spoke during the meeting. Mgr. Roncaglio Pachecio, who presided over the opening celebration, underlined the importance of the Spanish missionaries as a missionary presence in Latin America, and in particular in Chile, where the presence of OCSHA was very numerous for a long time. Also Bishop Ossandón, currently Auxiliary Bishop of Santiago and Diocesan Administrator of Valparaíso insisted on the same subject, who in his speech recalled exceptional figures in the Church of the Chilean capital that were part of OCSHA, some of whom are still today at the service of this Church as missionaries.
The meeting was also attended by the Apostolic Nuncio, Bishop Ivo Scapolo, who expressed his gratitude for the work done to the missionaries who participated in the meeting, and also to all those who preceded them in this missionary service of the Spanish Church, underlining the importance of having left their country of origin to serve as missionaries in the Chilean and Latin American Church. (LMM) (Agenzia Fides, 31/1/2019)