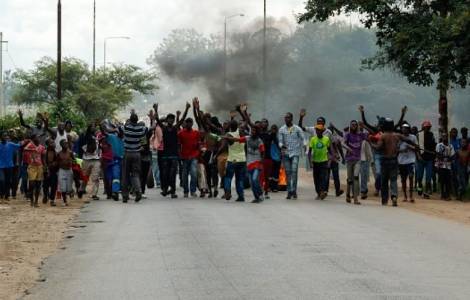 2019-10-23
A lay missionary, an apostle of lepers, towards beatification

2019-09-20
Appointment of the National Director of the PMS, Fr. Simplisio Manyika, O.Carm.

2019-09-17
Bishops denounce violence and beatings against the opposition

Harare (Agenzia Fides) - "I wouldn’t want to get into details at this stage, but it was about getting clarification. It is the beginning of a process that I wouldn’t want to pre-empt at the moment. It was simply to get an understanding on what provoked this situation and get answers why we are where we are and moving on, how government and the church can collaborate so that we move beyond this situation to a Zimbabwe we want", said Fr. Fredrick Chiromba, Secretary General of the Episcopal Conference of Zimbabwe, commenting on the meeting that a delegation of the Bishops had with the Vice President, Constatino Chiwenga, to discuss the tensions and protests that have caused at least 12 deaths in recent weeks.
The meeting, held on January 25, was attended by His Exc. Mgr. Michael Bhasera, Bishop of Masvingo and former President of the Zimbabwe Catholic Bishops Conference (ZCBC), who led the delegation on behalf of the current President, His Exc. Mgr. Robert Ndlovu, Archbishop of Harare, who was abroad. Mgr. Raymond Mupandasekwa, Bishop of Chinhoyi, Mgr Paul Horan, Bishop of Mutare and Mgr. Rudolf Nyandoro, Bishop of Gokwe, were part of the delegation. On behalf of the government, Vice President Chiwenga was assisted by the Minister of Defense Oppah Muchinguri and the Director of the Central Intelligence Organization Director, General Isaac Moyo.
The discussions, which lasted two hours, were defined by Fr. Chiromba, "very friendly". "There is good will on both sides", he added.
According to police sources, more than 1,000 people have been arrested since January 14, when a three-day strike was called after President Emmerson Mnangagwa raised fuel prices. The demonstrations of protests have degenerated into violence and looting. On 29 January, hundreds of lawyers demonstrated on the streets to demand justice for those detained in prison.
President Mnangwagwa has appealed to political, religious and civil leaders "to put aside differences and get together to start national dialogue". The President's appeal, however, was greeted with skepticism by some opposition leaders and civil society who demanded that human rights violations must be stopped immediately and that unconditional demonstrators must be released unconditionally.
According to Fr. Chiromba "The dialogue is still pending and much needed, there is so much polarization in the nation and the Church is best placed to mediate". (L.M.) (Agenzia Fides, 30/1/2019)