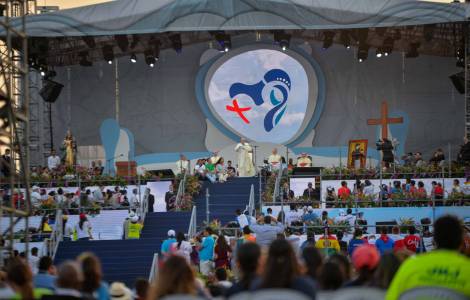 2019-11-06
Bishops: "listening, respect and dialogue are needed to build the homeland"

2019-07-10
May governors work for the dignity of the person and for the common good, and may citizens contribute to building a better Panama

2019-03-11
Conclusions of the Assembly of Bishops: "Let us not allow negativism to paralyze us"

2019-01-28
The Pope: "The Lord and His mission are not something temporary, they are not only a World Day of Youth: they are our life!"

Panama (Agenzia Fides) - "Starting from this World Youth Day (WYD), no poor, no 'child' can be forbidden to dream". With these words, referring to the small size and the little geopolitical importance of Panama, located in one of the "outskirts of the world", Archbishop José Domingo Ulloa, concluded the opening Mass of this planetary event.
Among the "poor" and "young" present at this WYD there are young Afro-discendents and indigenous. As part of the preparatory activities, the World Meeting of Indigenous Youth and the WYD Afro-discendent Forum took place, which was attended by 200 Afro-descendent youth leaders from Panama and Central America (11-13 January). For both events, Pope Francis congratulated the Central American Bishops, whom he met yesterday. Organized by the African Panamanian pastoral care of the Episcopal Conference with the close collaboration of the African Panamanian Youth Network (non-religious entity), the Forum brought together Catholic boys and girls but also evangelicals, Muslims, traditional religions of "Mother Africa" and non-believers, trying to understand "what unites us, rather than what divides us".
In an interview with Agenzia Fides, Stephanie Murillo, president of the Afro Panamanian Youth Network, explains that the Forum was an important opportunity to face together the needs of this very consistent community at a continental level, still victim of racism and discrimination, and to reflect on issues such as Afro spiritual influence, the role of black woman and the Church's impulse to create a new model of society. Murillo signals the joy and gratitude of the non-Catholic participants for the invitation of the Church "that promoted this space with great openness and tolerance".
Fr. Efraín De León, Executive Secretary of the African-American Pastoral Care of the Episcopal Conference, emphasizes to Fides the success of the initiative in promoting the participation of young people, who can be protagonists of changes in the Church and society in an articulated way. "Young Afro-discendents have a lot to say", he highlights. Eunice Meneses, Coordinator of the African Pastoral Ministry of the Archdiocese of Panama, says: "We want these young Afro-discendents to be the spokespersons of all their Latin American and Caribbean peers, through the proposals they wish to hand over to the Pope". "The Forum is the fruit of the experience and work of the Church of many years", explains Fr. De León. "We want to help young Catholic Afro-discendents in the search for space to celebrate faith and life in the Church by manifesting their culture, it is important for the inculturation of the Gospel and to enrich the Church in her mission. At the same time, this is the possibility of a new pentecost for us which implies for everyone in the Church a personal and pastoral conversion".
"For the people and for the Bishops, specifies the Afro discendent priest, conversion has to do with a change of attitude in the face of different cultures, which can all be languages at the service of evangelization. We have to open up more. Yesterday the Pope explained to the Bishops that a shepherd should not always walk in front of the flock. Sometimes it must be in the middle, and sometimes behind, so that no one stays behind and gets lost". (SM) (Agenzia Fides, 25/01/2019)